Israel Folau will make his presence felt on one of rugby league’s biggest days, with the cross-code star set to attend the opening State of Origin encounter just hours after his bid to return to the game is heard in the Queensland Supreme Court.

Folau is seeking an injunction against the Queensland Rugby League in a bid to return to the playing field for the Southport Tigers. The matter is listed for a directions hearing on Wednesday, the day the interstate series kicks off at Townsville’s Queensland Country Bank Stadium. 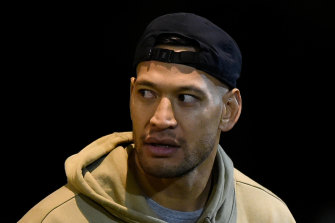 Israel Folau is preparing himself for a legal stoush.Credit:Getty

Catalans granted Folau permission to return to Australia late last year on compassionate grounds, but expects him to return or provide a financial settlement in exchange for a release.

Palmer has accused the Super League club of treating Folau “like a slave”, but Dragons football manager Alex Chan remains unmoved. Team Folau has also written to the QRL to inform them that all actions against the governing body and its directors will be withdrawn should Folau be registered. However, the impasse will now be resolved in court.

Another controversial figure, Tony Williams, has been cleared to play for the Tigers. The former NSW and Australian back-rower has been officially registered by the QRL after his contracts with Windsor Wolves and US league team New York Freedom were torn up following statements he made on social media in support of convicted rapist Jarryd Hayne.

Williams has apologised for the comments.

Folau’s legal challenge, coupled with his appearance at Origin I, has the potential to take attention away from one of the marquee games of the season. Folau, who is reportedly being paid $250,000 to play for the Tigers, made five appearances for the Maroons between 2008 and 2010.