France commit to Six Nations despite threat of travel ban

France have given their strongest indication yet that the Six Nations Championship will go ahead as planned despite concerns about the spread of the British coronavirus variant ahead of key talks on Monday with the French government.

Officials from the French sports ministry are to meet with Six Nations representatives after revealing on Saturday it was set to impose a ban on cross-border elite sport with clubs in the United Kingdom in response to the spike in infections. 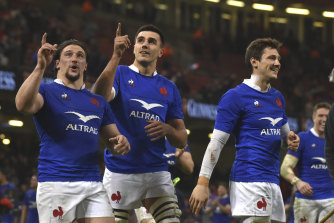 A potential ban on UK sides entering France threatens to disrupt the Six Nations, scheduled to begin next month.Credit:AP

The Women's Six Nations is set to be postponed as a result of the escalating coronavirus crisis, with organisers now looking to reschedule the tournament to start in April.

The French sports ministry also wrote to Top 14 clubs on Saturday, advising them not to take part in cross-border matches with sides from the UK, which is expected to lead to the suspension of the final two rounds of the pool stages of the European Champions Cup.

However, Bernard Laporte, the president of the French Rugby Federation, insisted yesterday that the men's Six Nations would go ahead as planned, with health protocols to combat the "English variant" of the virus in place.

"The Six Nations will be played – with health protocols imposed by the French government, adapted to the English variant of the virus," said Laporte on French radio. "Like in the autumn, we will apply these new protocols. I am not worried. We do not foresee any other scenario other than us playing the Six Nations. In the autumn, the protocols worked well but, with this new strain, I am not sure what new protocols will be introduced. Regardless, rest assured that the Six Nations will go ahead. All will be fine."

Six Nations officials are also optimistic that representations with the French government will prove successful despite concerns that the spread of the new variant of coronavirus across the Channel could lead to a deteriorating situation in France in the coming weeks.

"We are working hard to hold the tournament as scheduled in each country, with COVID protocols further reinforced from the October to November period that saw the successful conclusion of the Six Nations 2020 and the Autumn Nations Cup," a Six Nations spokesperson said.

France, who are scheduled to open their campaign against Italy in Rome on February 6, are not due to host a match until the visit of Scotland on February 28 and do not visit the UK until March 13, when they play England.

If the French government does restrict France from participating, it opens up the prospect of a postponement, as sources have confirmed the championship will not proceed without their involvement. The British and Irish Lions, meanwhile, are set to visit South Africa for an eight-match tour beginning in July.

Champions Cup officials were yesterday holding urgent talks with the Ligue Nationale de Rugby for definitive clarification about the participation of the Top 14 clubs ahead of the scheduled resumption of the competition this weekend after they were "invited" by the French government to cease cross-border competition.

The French sports ministry said it was "leaning towards the adoption of measures to restrict or even prohibit participation of French team sports clubs in matches including teams from the United Kingdom".

The withdrawal of French clubs would lead to suspension of the tournament, with officials hoping to reschedule it for later in the season.