Jarryn Geary was taken from just about the bottom of the pile. Arriving at St Kilda from Bendigo via pick 58 in the rookie draft of late 2006, he was the 146th picked of 151 in his draft class. The Saints had a hardened side. They'd made the finals three years in a row. And yet the skinny teenager's attitude left an impression, even with the likes of Lenny Hayes, Nick Riewoldt and Robert Harvey.

"Even the senior guys really looked up to him for how hard he worked and the way he went about things," said former Saint Clint Jones this week. 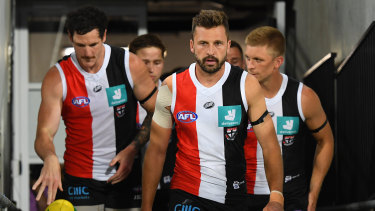 Jarrryn Geary was a leader from his early days with the Saints.Credit:Getty Images

"He led by example from a very early age, and was happy to voice his opinions. We had a pretty senior team at the time, so [it stood out] for a young guy to come in and have the confidence to be able to have an opinion and those senior guys really listened to him."

On Saturday, Geary will lead the Saints into their first final in nine years. He will do so as St Kilda's sole survivor from their last final, an elimination final loss to Sydney in which he started the game in the fluoro substitute's vest.

Former St Kilda skipper Aaron Hamill works closely with Geary these days as the Saints' back-line coach. In 2007, the beaten-up warhorse was trying in vain to get back onto the park in what would turn out to be his last season on an AFL list.

Geary was at the other end of his career, and the youngster's grit was evident.

"What I remember is he was a determined young bloke," Hamill said.

"It certainly hasn't been easy for him. He was certainly made to earn his stripes. He takes nothing for granted."

Leading is natural for Geary because he walks the walk. But as Hamill points out, Geary has an advantage in the sense that he can empathise with the last player on the list, because he's been there. He's had to deal with selection disappointment more than many, playing 44 of 66 home-and-away games between 2008 and 2010 but none of the Saints' 10 finals across those three seasons.

"He'd be the first to say that he's not the most talented player out there, but his effort and team-first mindset, and selflessness as a player and teammate, is what stands out," said teammate Jack Billings.

"He demands high standards. It's all-around effort and your application to your footy and your team. He's a very respectful and humble person. That's what he demands of all his teammates.

Geary won't have the highlights reel to match most other captains around the league, but there are moments that define him. When out through injury for the round three match against Collingwood, he shocked club staff after the game by helping clean up St Kilda banners and scarves that had been strewn over seats.

A year earlier, at the MCG, he saved a goal against Melbourne, but in doing so suffered a severe corkie that needed three surgeries, 30 stitches and 19 staples to heal.

"That moment really captures him as a footballer and what he's always been about," Billings said.

Jones notes that those sorts of courageous acts defined Geary's football, even in those early years.

The paradox of Geary is that despite his professionalism, he can also be one of the lads. The word "pest" is a common refrain when asking about his personality.

And in contrast to the cliched perception of a back-pocket, Geary is a food snob.

"He's unlike all the other backs. He does like the finer things in life," Hamill said.

On a more serious note, Hamill said he could envisage Geary making it as a coach.

"He'd be an excellent coach. Given his experience in footy and his high EI [emotional intelligence] he'd be a very good coach," he said.

Saturday will be the culmination of an enormous fortnight for Geary, whose wife Emma gave birth to their second child Freddie last week. Emma and their first child Harriet had travelled with the Saints to their Queensland hub.

"That gives you a pretty good insight into how much he's committed. He's happy to bring his wife Em up here, who has supported him a lot but has got a good understanding of how important it is to him," Hamill said.

Hamill was glowing in his praise of Emma, too.

"We do call him the Don Bradman. He knows he's batting well above his average. He seems to think the funny guys get the good ones. She's just a star," he said.