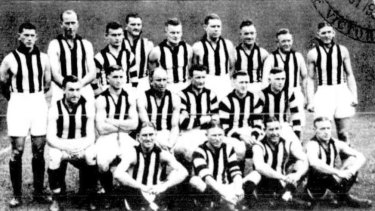 Overpowering superiority in a dazzling third quarter effort enabled Collingwood to secure their fourth successive premiership on Saturday, and thus establish a fresh League record. Analysis of the happenings in the last four seasons proves the famous combination the most accomplished, resourceful, rugged and mobile for years and mobile for years, and everyone connected with the club is to be congratulated on the wonderful performances of the last four years.

No sooner had Saturday’s grand final opened at the Melbourne Cricket Ground then it could be sensed that Collingwood had allotted themselves the task of disorganising the system of their fleet-footed opponents from Geelong.

Extreme vigour was poured into the heavyweight exchanges from the outset, but Geelong, to the delight of the huge following, stood the heavy buffeting without flinching. Collingwood’s dour determination, allied to flashes of strategic play, gave them a lead of inconsiderable dimensions at the first change, the scores then being 3.2 to 2.5.

Geelong’s enthusiasm was at high pitch throughout the second quarter, when the Bay men, striding through the Collingwood defences with astonishing ease, built up an advantage of 6.10 to 3.7, despite a fatal lack of forwards of real class. Several easy chances were mulled, and goals were badly missed from favourable positions. 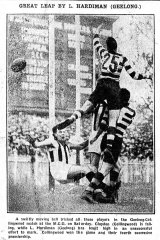 To say that were dumbfounded is stating the fact lightly. Geelong went totally to pieces, and as the last change Collingwood led by 11.13 to 6.11. Wholesale place changes would have been justified, but there were no drastic moves. Geelong foolishly retreated from playing the long game.

Badly directed attempts at half distance passing robbed the Bay team of any hope of a sensational last-minute recovery, and Collingwood, with their determined methods, raced on to secure yet another premiership, the bell terminating the game and the season with scores Collingwood 14.16 and Geelong 9.16.

Even Scoring in First Term

Mixing it determinedly, Collingwood in the opening quarter played the man more than the ball. There was very solid stopping in the crushes, but Geelong, working agilely on the fringes and shooting the ball into the open, had the better of play at the outset.

Williams with a long, driving kick missed the goal, but immediately afterwards, following smart action by the diminutive Carney, the ball shot forward, where Broughton raced away from a pack and goaled.

Carney crashed as the result of a crush collision, Collins was vigorously bustled by A. Collier, and Coghlan rushed in to jolt Collier. Field Umpire Scott immediately gave indication that he was determined to penalise all unnecessary interference.

Both Rayson and Coghlan scored singles, Coghlan missing with a powerful drop-kick that deserved a goal. Carney’s speed opened the way for another Geelong thrust, and when Llewellyn goaled and Geelong led by 2.3 to nil the Bayside supporters were very demonstrative.

Collingwood’s aggressive tactics were gradually sapping the vitality of the opposition, and the play swung against Geelong. Quickly snapping at the goal, F. Murphy spun the ball to the base, where it bounced over the heads of two players and through. Todd, very dependable, halted other thrusts, and in the recoil the ball whisked forward, where Kuliken’s shot was touched.

Blending weight and pace nicely with sound tactics, Collingwood gradually prevailed, despite desperate defence by Todd and the brilliance of Carney,, who was outpacing Chesswas. A. Collier continued to harass Collins, Metherall and others in the forward zone. 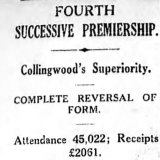 Marking high, Makeham drove powerfully down to the goal, where G. Coventry marked in the base, and goaled. A series of punches carried play to Coventry again, and just missed. Geelong tackled vigorously, and Kuliken shot wide from the pocket to score a single. Makeham was particularly solid and dependable for Collingwood.

A free to Andrew and snappy action by H. Collier and Clayden culminated in G. Coventry outwitting the Geelong defence and gaining the lead with a snap goal. At the first change the scores were: Collingwood, 3.2; Geelong, 2.5.

Always playing on and dispatching the ball with better direction, Geelong had their great opportunity in the second term, but the failure to convert simple scoring chances deprived them of about five goals.

Todd and Hickey successfully smashed Collingwood drives early in the quarter, and play swung to the pocket, where Geelong were held at bay by the decisive fashion in which Runney was outpointing Rayson.

Evans brought off one of the most spectacular aerial captures of the match, and Troughton, as busy as ever, goaled. The members of the Melbourne Cricket Club stand hooted A. Collier for attention paid to Collins.

Rayson’s shot from the angles was inches off the goal, the next attack ended in Hardiman firing out of bounds, and blink kicks went astray before Kuliken, awarded a free for interference by A. Collier, punted Geelong’s fourth goal.

Mockridge saved at the base when G. Coventry fired. Geelong’s counter-attack produced brilliant, concerted action, but there were groans when Troughton’s drive swung wide. A miskick by Coghlan landed with Makeham, who drove tremendously with one of the most powerful kicks of the match, and G. Coventry, seventeen minutes after the term opened, gained Collingwood’s opening score of the quarter – a single.

Libbis with a quick snap landed the ball in the base, the bounce shooting it on to the goal post. Lamb and Hickey drove Collingwood off, and Troughton, Hardiman, Carney and Llewellyn cooperated splendidly, the last-named capping the brisk drive with a goal.

Kuliken from point-blank range missed badly, and though S. Coventry and Clayden, with F. Murphy, also thrown into defence, momentarily eased the pressure, Rayson, perfectly shepherded by Troughton, who held off Clayden, secured a fine goal.

Geelong were unbeatable in the air, but at the goal-front wasted opportunities, five shots bringing two singles. In the term Geelong had 70 to 65 kicks, as against 62 to 63 in the previous quarter. At half-time Geelong were pleased with their lead of 6.10 to 3.7.

Eight Goals Six to a Single!

Forsaking manhandling for scientific football, Collingwood in the third quarter demonstrated how the game should be played, and scored eight goals six behinds to one behind. Danger signals as far as Geelong were concerned were noticeable early in the term.

Collingwood wrested advantages on the flanks, Chesswas silencing Carney very effectively. In the packs S. Coventry set an inspiring example and the men of the attack played super football. Geelong began to flounder when G. Coventry marked high in front of Todd and goaled. H. Collier just missed, Makeham waited for the punch out from a crush in the base and quickly snapped the second of the eight-goal breakaway.

Coventry from the angle scored another goal and Beveridge, dashing into the attacking zone, also fired on goal. Geelong supporters were dumbfounded. Another behind was scored, and then Makeham, again waiting for the punch from the crush, secured another goal.

A lack of combativeness on the parts of Geelong let Collingwood in for additional goals. Metherall, with a long punt, had scored a single for Geelong when Collingwood opened another bombardment and G. Coventry twice tricked the defenders and scored goals.

Collinwood in the term had 67 kicks to 46. At the last change Collingwood led by 11.13 to 6.11. They had been superior in every section, and usually dependable Geelong men had been rarely sighted.

Collingwood played F. Murphy as an extra man in defence throughout the last quarter, and though Geelong made strenuous efforts, the Collingwood third-quarter efforts had taken most of the fire and fight out of the Baymen.

All the sting vanished from the play long before the final bell, the gong finding Collingwood five clear goals ahead with the scores.