From the Archives, 2004: Port hold off Saints in frantic prelim final

Port holds off the Saints

All night, this match seemed destined to be won by the least likely team. 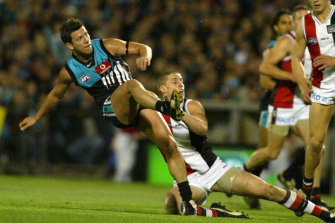 When Port Adelaide went inside at half-time, it was four points closer than St Kilda to its grand final day, but had been taken there almost entirely by efficiency, the Saints possessing the more desperate midfield run and the forward line that would, surely, start taking advantage of its greater opportunity.

When the Saints huddled together at the next break, they led by one point, having grabbed almost all the chances that had flowed in the first term, and after pushing the ball around the ground with slightly less authority than the Power.

And so, the preliminary final came down to one of this season’s most frantic quarters, and to which side could not only create a chance for itself, but milk it. 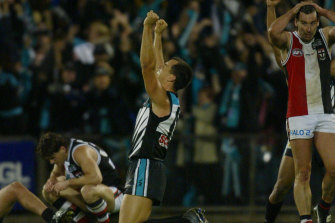 Port Adelaide pushed into its first AFL grand final with a gripping six-point win over an equally desperate opponent.

The Saints’ three-quarter-time lead lasted less than a minute; Gavin Wanganeen, having avoided the ball entirely in the first half, and touched it three times in the third term, fell on his sore shoulder at the 50-metre line and goaled. Port‘s lead was snatched back when Nick Riewoldt snapped St Kilda back in front less than two minutes later.

A running goal to Stuart Dew turned the momentum again, and a dubious free kick for “holding” against Luke Penny on Dean Brogan 10 minutes into the last quarter stretched the advantage, but the persistent St Kilda would not stop. 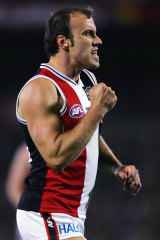 From the centre bounce after the Brogan goal, Andrew Thompson trapped the ball and fed it to Robert Harvey, who found Riewoldt’s lead.

Riewoldt, on a sore leg, presented again five minutes later, pushing a pass to Luke Ball, whose set shot evened the scores before Wanganeen kicked a wild snap from the forward pocket spin through with six minutes left.

Roger James snapped the ball out on the full with two minutes left to give the Saints a final opening. Stephen Powell sneaked into space and found Riewoldt, whose kick to the top of the goal square looked destined to fall at Brent Guerra’s feet until Shaun Burgoyne threw himself across to ground, pushing both the ball and his side over the line.

The best parts of St Kilda‘s start were equally excellent and ominous. The Saints kept the ball trapped near their goals for most of the first quarter, kicked the game’s first goal and also the second, meaning the three-minute hubbub that followed Gehrig’s 100th goal for the season was not too vital a distraction. 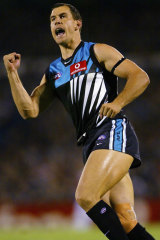 Port Adelaide kicked its opening goal in the minute after the crowd invaders were sent back to their seats, a Warren Tredrea mark and goal introducing him quietly to the game, but still the ball ran St Kilda‘s way.

Harvey was so creative through the middle that the question, immediately, was how long he could keep going.

Powell found, or was allowed, an amazing amount of space, but dived willingly into any contest he got to. The increasing say of Heath Black and Lenny Hayes meant the Saints had more fun in the middle, with the Peter Burgoyne quiet and the Power relying first on Roger James and, later, Josh Carr and Kane Cornes for most of its drive.

Gehrig appeared in a particularly aggressive mood, and also owned a reworked accelerator. Goal No. 100 out of the way in the first 11 minutes, Gehrig took five shots at goal in the first two quarters, kicking five goals, one point and pushing another shot across the face.

A Brett Voss match-up kept Chad Cornes sufficiently confused, the ball came down enough times for Stephen Milne to look like he might, at least, do something, and Riewoldt was rarely called on, raising only the question of what the Saints would do when he did – and he did – get going.

There were more “what happens when….?s”, however, about Port Adelaide‘s first term, and the Power’s efficiency meant they didn’t have to stress too much about getting things going.

St Kilda: Hamill (knee) replaced by Knobel in selected side.