‘Hard to see him leave’: Finucane hopes for a premiership exit from Storm

Dale Finucane has watched countless teammates deal with their departure from the Melbourne Storm; this year, his time has come.

Every team deals with these situations, but the Storm’s six-year streak of preliminary final appearances means their annual exits co-exist with chasing a premiership. 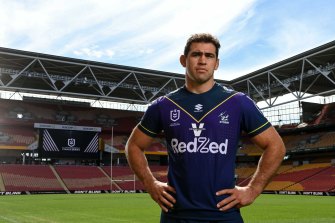 Storm co-captain Dale Finucane wants to lead his side to a premiership this season before he joins Cronulla next year.Credit:NRL Photos

This week the Storm are waiting to find out their preliminary final opponents, with Penrith and Parramatta facing off for the right to face them in Brisbane next Saturday.

If the Storm win, Finucane will get the chance to leave the club with a third grand final victory.

Finucane has been a fixture since arriving from the Canterbury Bulldogs on the eve of the 2015 season, playing in two premierships and four grand finals.

This year he and good mate Jesse Bromwich were named as co-captains, replacing the legendary Cameron Smith, and that the appointment was made despite both player and club knowing their tight salary cap was likely to mean Finucane would leave in 2022.

The 30-year-old signed a lucrative four-year deal with Cronulla meaning he, wife Maddie and toddler son Freddy will head back to Sydney.

“It’s funny, I was only talking to my wife about it the other day and we are down to potentially last or second-last game, so I haven’t thought too much about it prior to that,” Finucane said.

“I’ll try not to think too much about it until the last game has been played.

“It’s a weird experience. I remember from the 2016 grand final, which was my second year at the club, we had five guys moving on from that team and every year since then we’ve had guys move on from prelims or grand finals, it will be quite surreal when it’s myself.”

Storm coach Craig Bellamy said in July he would be “devastated” to lose Finucane but when the player approached his coach with his plans to leave, Bellamy talked through his options with him and helped him decide on the Sharks.

Bellamy admits Finucane won him over as a young player when the Storm brought him to Melbourne for a recruitment visit only for the player to opt to stay at the Bulldogs.

He rang Bellamy personally to explain his decision, which is, in part, why the club kept chasing him until he joined them.

“I went to speak to Craig and he more or less knew what the conversation was about,” Finucane said.

“It was still a tough conversation and it was good in the fact that he actually helped me make a decision because the conversation was also around him helping guide my decision and where I should go. We’ve got the relationship to be able to do that.

“He can’t vouch for everyone but there were people he had a familiarity with, certain people in certain roles, and my knowledge of [incoming Sharks coach] Craig Fitzgibbon and Craig having a bit to do with him helped guide my choice.”

Bromwich hasn’t seen any sign of Finucane’s emotions are showing.

“It’s going to be hard to see him leave and put on that Sharks jumper next year, but you have to make the most of it,” Bromwich said.

“With teammates leaving, I’ve gone and done it 100 times, some of them are my best friends and you just keep moving forward.

“We’ve been in this bubble the last two years and the families have gotten really tight, so you don’t only see Dale leave, you see his partner Maddie and his son Freddy leave as well, so it’s a big hole.

“He’s a big part of our team, he is a leader of our team. He really sets the tone with his training and his routine, so he’s going to be missed.

“He’s the ultimate professional, he won’t let anything get in the way of his routines and that’s why we love Dale, you know he’s always going to give 100 per cent no matter what he’s doing,”

Bromwich admits this season will be a tough one with Finucane, winger Josh Addo-Carr (Canterbury) and utility back Nicho Hynes (Cronulla) leaving.

“It’s important we make the most of [the] opportunities we’ve also got because ‘Foxy’ [Addo-Carr], Nicho and a few other guys [are] leaving.

“They’re a big part of the team as well, so it’s also hard to see all the other guys leave as well.”