‘He won’t be considered’: No SOS call to Latrell after Wighton COVID-19 positive

One person who will not be receiving a Perth Origin SOS is Latrell Mitchell with Brad Fittler officially ruling the South Sydney star out of contention.

The Blues have a centre vacancy following the news on Friday night Jack Wighton had been struck down by COVID-19.

Mitchell wears the No.1 in club land but was one of the stars for his state last year when moved to the left edge.

Despite Souths making it clear they had no interest in Mitchell being picked for NSW, especially when he had not played for two months because of a hamstring injury – and he has only just come out of COVID isolation – the Blues kept everyone guessing most of the week.

Fittler respected Souths’ wishes, and spoke with Mitchell at WIN Stadium on Thursday night when the Bunnies were belted 32-12 by St George Illawarra.

“I spoke with Latrell on Thursday night – he seemed good, he was walking up and down the sideline,” Fittler said.

“We didn’t really have a deep chat about his injury. He would have needed to have played [to be picked]. Given how Souths have come out [about his injury], I didn’t speak to him about whether he would play. 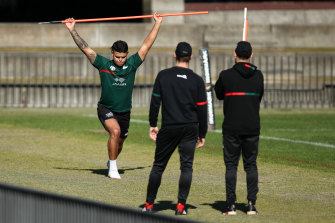 Brad Fittler has ruled out an SOS call to Latrell Mitchell.Credit:Getty

“And given their result [against St George Illawarra], I didn’t go into depth with the coach or training staff about him. But he won’t be considered.”

The easiest option for NSW to cover the loss of Wighton – easily the Blues’ best in the game one 16-10 loss to Queensland – is to promote Stephen Crichton from the bench to left centre where he would link with Penrith teammates Jarome Luai and Brian To’o.

Matt Burton won a competition in the centres with the Panthers, but talk of him filling the utility role is premature because he can only play centre or five-eighth.

Fittler always had a plan for Crichton in Sydney when named on the bench with Wighton and Kotoni Staggs the starting centres.

“I always planned to play him at right centre at some stage,” Fittler said of Crichton. “I just always figured they would be under a lot of pressure on that side.”

Fittler and Greg Alexander will continue discussions on Saturday and hope there are no more injuries – and COVID casualties – in the next 24 hours before the Blues fly to Perth early Monday.

Meanwhile, Canberra coach Ricky Stuart told the Herald late Friday he had been with Wighton and fellow Raiders Elliott Whitehead and Jordan Rapana at a function the previous night, only for Wighton to return a positive test on Friday. Stuart, Whitehead and Rapana returned negative tests.

“It’s a massive blow, but the critical part of it is we haven’t had two games together with the same spine for about two months – we just can’t get any continuity or momentum going,” Stuart said.

Watch the State of Origin exclusively live and free on Channel 9 and 9Now.