Heir time? Why rising Swan is soaking up every second with Buddy

It’s basically Logan McDonald’s entire job, at this very early point in his AFL career, to watch Lance Franklin’s every move as closely as possible, ask him as many questions as he can and absorb all the answers.

Most of the time, it’s questions like: How on Earth did you do that? Can you teach me how to do it, too?

But even accounting for his increasing confidence at the game’s top level, there’s one question McDonald isn’t bold enough to put to his idol and mentor: What are you doing next year?

“That’s a question that goes unasked,” he said. “He’s making the decision that’s best for him, and he has that right. Everyone’s very understanding of that at the club and there’s no pressure whatsoever on him to make any sort of decision. He’s been a fantastic player for this club, and still is. I hope he stays, but whatever happens, happens.”

Swans fans will perish the thought, but one of the many subplots buried within Sunday’s tantalising showdown between Sydney and Collingwood – beyond the sky-high stakes for both teams, the sell-out crowd and the Pies’ captivating 11-game winning streak – is the distinct possibility it could be Franklin’s last home-and-away outing at the SCG. 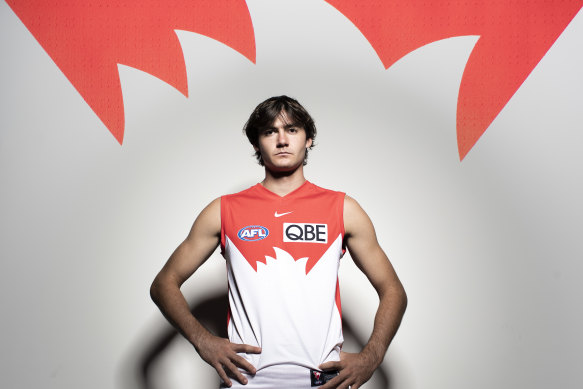 Logan McDonald is widely seen as the long-term successor to Lance Franklin in Sydney’s forward line.Credit:Getty

Anyone who says they know either way, as the past few weeks have shown, is probably lying – unless it’s come from the man himself, who has put contract talks on hold until the end of the season. That’s not usually a good sign, and there was almost a degree of wistfulness to coach John Longmire’s advice, dispensed openly last weekend, that the footy world should just sit back and enjoy whatever is left of the Buddy Franklin journey, on whichever side of the NSW-Queensland border it should happen to finish.

McDonald is doing exactly that. Having spent the better part of the past two years – his first two in the AFL system – pinching little bits from Franklin’s footy arsenal and, where possible, adding them to his game, the 20-year-old is keen to soak up every remaining moment of surely the best internship a young key forward could ask for.

“Playing with Bud, you’re in awe every day at training or in games, seeing what he can do,” McDonald said.

So, what is the most freakish thing he’s seen Franklin do, behind closed doors?

“It’s hard – he kicks a lot of crazy goals at training, one-handed marks, things like that,” McDonald said. “The list goes on. You sort of get a bit numb to it now. You’re just like, ‘Oh, that’s Bud.’ He does the lot.

“Just watching him and learning from him, he’s been so helpful with me. The way he reads the game, he’s so smart. He really wants to see me succeed, and he’s really happy for me when I have some sort of success or good moment in a game. I’m always learning off him, whether that’s about body work or leading patterns, or smarts, or the way he looks for moments in games to take over is something that I really look up to. I’m just going to keep learning as much as I can.” 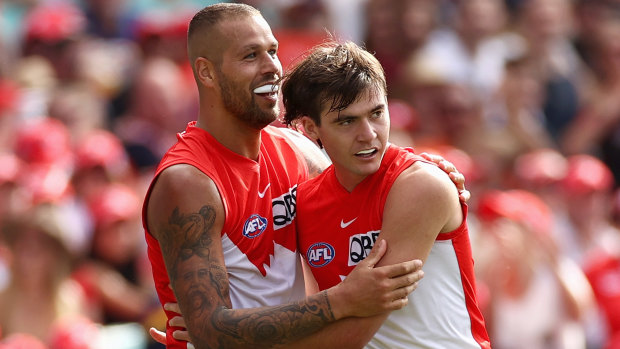 Lance Franklin has taken Logan McDonald under his wing, but the emerging Swans star won’t be asking his mentor about his future at the club.Credit:Getty

It hasn’t been smooth sailing so far for the 20-gamer, who has been dropped twice this year and sent back to the VFL to work on his aerial and contested work. Every week, he is competing with fellow talls Sam Reid, Joel Amartey and Hayden McLean for a spot in Sydney’s forward line, next to Franklin and fellow superstar Isaac Heeney, who plays his 150th game on Sunday.

There is similar competitive tension on almost every line for the Swans, which has helped propel them up the ladder in recent weeks. If they beat Collingwood, they’ll go close to stitching up a top-two finish – and a rails run at another flag.

Both teams come into Sunday’s clash unchanged and in top form. A crowd of more than of 40,000 is expected, depending on how many SCG members turn up. Sydney hasn’t seen a game like this in years, and McDonald definitely hasn’t in his short time at the Swans.

But there’s another reason why Sunday is so big for him, personally: the opposition, who McDonald supported growing up despite coming from Perth. He was indoctrinated by his father, who comes from Coorow in regional WA, where the local footy team is also known as the Magpies.

“They all went for the Magpies in the VFL at the time,” he said. “Then West Coast came in [to the AFL in 1987] and they all changed except for my dad, who passed it onto me.

These days, though, his inner Pies fan is well and truly under control. McDonald has admired from afar the special feeling swirling around the club as they continue defying the odds, week after week, but will get precisely zero joy from seeing their winning run extending to a 12th consecutive game.

“Hopefully, we’ll pump them this week – that’d be good,” he said with a grin. “But they’re playing some good footy at the moment, 11 on the trot. They’re really young, exciting. They play a really strong team defence, and they never leave each other out to dry, really. They always help each other and defend together and that makes it hard for teams to pick that apart. We’ve got plans and processes in place to hopefully try and exploit that and get some results and kick some goals and win the game.”