Hinkley voted coach of the year by peers

Ken Hinkley's effort in hauling Port Adelaide back up the ladder has been recognised by his peers with the Power coach named the AFL Coaches' Association's coach of the year for the second time.

Hinkley, who won the award in his first season at the helm in 2013, had entered the season under pressure to retain his job but took Port to the top of the ladder and a narrow preliminary final loss to Richmond. Brisbane Lions coach Chris Fagan was runner-up to Hinkley, while Geelong's Chris Scott was third. 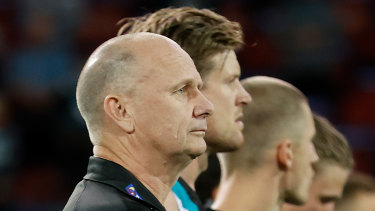 “I’m very humbled to be voted the AFL Coaches Association coach of the year,” Hinkley said.

“There were any number of coaches who could have justifiably been awarded this honour for 2020.

“I am very grateful especially when you look at all the great coaches who have received this award in years’ gone by.

“Ultimately though this award is a team effort and a reflection upon an entire group at Port Adelaide."

“We know this award is held in high esteem, because it has been determined by more than 150 AFL coaches this year. We congratulate Ken, for winning this award for the second time, his assistant and development coaches and also those around and above him at Port Adelaide,” Brayshaw said.

Veteran coach and administrator Neil Balme received the lifetime achievement award from Neale Daniher, after whom the award is named.