If the All-Indigenous Deadly team of the 21st century ever took the field together they’d break every record in the book.

No matter who judges Cliff Lyons, Tony Currie, Ricky Walford and Steve Renouf name in their squad, it promises to be a list of some of rugby league’s most dazzling and beloved players of recent years.

Between them the nominees for the Deadly — the indigenous word for awesome or great — Team of the Century boast six Dally M medals, dozens of premierships, hundreds of Test and Origin caps and countless magical rugby league moments. 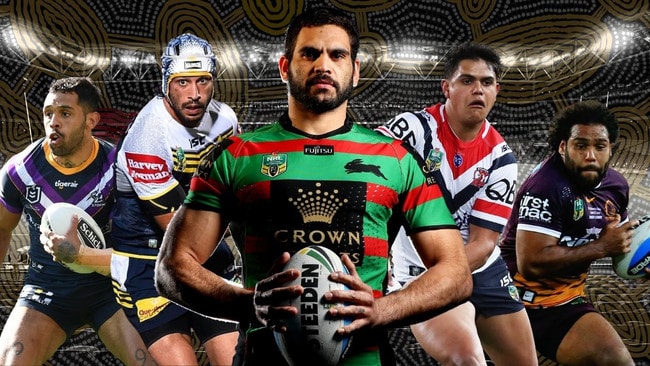 Josh Addo-Carr, Johnathan Thurston, Greg Inglis, Latrell Mitchell and Sam Thaiday all have a claim to a spot in the Indigenous team of the 21st century.Source:Supplied

Johnathan Thurston is a certain pick at halfback ahead of Scott Prince and Chris Sandow, but picking his halves partner is a major head-scratcher.

Cody Walker and Jack Wighton fly the flag for the current generation, along with Gold Coast’s Tyrone Peachey, but Jamie Soward and Preston Campbell are also in with a chance.

Either Nathan Peats, Travis Waddell, Ray Thompson, John Doyle or PJ Marsh will pack down at hooker to round out the spine.

Picking two wingers will also be no easy task with the five nominees (Josh Addo-Carr, Blake Ferguson, Nathan Blacklock, Alex Johnston and Nathan Merritt) combining for 641 tries and counting over the course of their careers. All but Ferguson earned top tryscorer honours at least once in their decorated careers with Merritt boasting the second-most tries of any Indigenous player in the game’s history.

Centre is just as deep with Brisbane’s Justin Hodges leading the way along with Timana Tahu, Will Chambers, Willie Tonga and current Rabbitohs and Queensland star Dane Gagai.

Thompson holds the record for most appearances for the Indigeous All Stars side with seven caps since the match was introduced in 2010.

Cult hero George Rose leads the charge for the front-rowers, along with another fan favourite in former Queensland Origin prop John Buttigeig with Carl Webb, Ryan James and Andrew Fifita rounding out the shortlist.

Greg Bird, a five-time Indigenous All Stars representative, is the leading contender at lock forward ahead of South Sydney and Parramatta interchange weapon Dean Widders with Jamal Idris, Kyle Turner and Cory Patterson also in the running.

Only players who played the majority of their careers after 2000 were considered, rendering the likes of Laurie Daley and Matt Sing ineligible.

Originally published asVote now: Who makes the Deadly team of the 21st century?