‘It would mean everything to us’: Rebels set sights on first finals appearance

It's taken 10 years but Melbourne Rebels have the chance to earn their first appearance in the Super Rugby finals.

Though to do so, they have to beat the Western Force in Newcastle on Saturday as a win will see them past the New South Wales Waratahs and into the top three of the Super Rugby AU competition.

Rebels back Reece Hodge is the longest-serving among the current playing list and he has seen enough disappointments in recent years to know this is the team's best chance to end their finals drought. 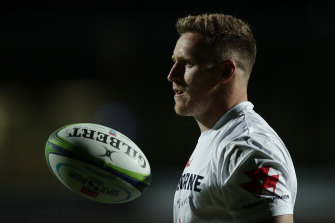 Veteran Rebel Reece Hodge hopes his club can give Victoria something to cheer about. Credit:Getty Images

"It would mean everything to us and not only us but our families and the fans back in Victoria," Hodge said on Tuesday.

"They have been doing it tough. We talked a fair bit at the start of the campaign about how we could bring some joy to their lives and how privileged we are to be here on the road and able to play footy at all.

"Our squad of 30 or so guys have sacrificed so much to be here and left families and loved ones at home.

"We don't need any extra motivation for this week. It's a massive game for the club and everyone who is in the match-day 23 will be doing all they can to get us over the line."

Hodge has again shown his versatility this campaign, starting in the centres before moving to full-back after captain Dane Haylett-Petty went down with an injury mid-season.

This week Haylett-Petty has been training with a view to pushing for selection although coach Dave Wessels faces a tough call on whether to immediately throw Haylett-Petty into full-back or retain Hodge in that role and use his skipper as an outside back.

"Whatever role I have to play this week and going forward, I will do it for the team," Hodge said.

The Rebels play Western Force in Newcastle on Saturday at 3pm AEST.