It’s been a big week in art … with Jim Pavlidis

No club this season embodies the popular aphorism ‘‘footy is played mainly above the shoulders’’ more than Melbourne.

The stakes couldn’t have been much higher on Thursday night when the Demons, playing for a top-eight spot against a bottom-four opponent, showed up in body but not in mind and put on a shocker. 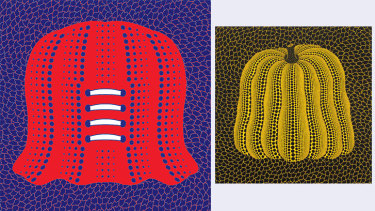 Devil is in the detail: pattern of behaviour from the Demons (illustration: Jim Pavlidis) and Yayoi Kusama’s Pumpkin original.Credit:

Their fans, however, simply want a more consistent effort from their flaky heroes.

Her polka dot pumpkin may look innocent and funny, but look closely for a minute and you’ll find yourself falling into the infinite space those dot patterns conjure.

Melbourne have fallen into a pattern of mediocrity, but have the talent to be infinitely better.