And as for any public backlash had de Belin been elevated to the top job, despite misleading the Dragons about attending Paul Vaughan’s infamous barbecue six weeks ago, Griffin said: “That’s up to the public. It’s not one for me to answer.”

The Dragons came under fire for even entertaining de Belin as their skipper, as revealed by the Herald.

League legend Laurie Daley was among those stunned. “I can’t believe they even considered him being the captain of the side given what he put them through the last four to six weeks,” he said on The Big Sports Breakfast radio program.

De Belin spent nearly three years out of the game after being charged with sexual assault. Those charges were later dropped after two separate juries failed to reach a unanimous verdict.

A month after he was welcomed back to the game, de Belin was one of 12 Dragons players hit with COVID-19 breaches for attending Vaughan’s Shellharbour party. There were reports he hid under a bed when police arrived to break up the party. 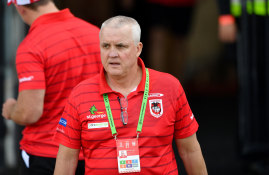 What made matters worse was de Belin kept quiet when asked by the club if he had attended, only to eventually come clean.

“Tuesday afternoon we ran through a few names [for captain] … Jack is a good person and leader within our group,” Griffin said on Saturday.

“But Tariq Sims is our captain on Sunday and it’s a great honour for Tariq. He’s a local boy and we celebrated his 200th game a couple of weeks ago.”

Pressed on whether de Belin was seriously considered for the role, Griffin said: “No, I don’t think so. When we lost Andrew McCullough, there were four or five guys that could be captain of the side.

“It’s a funny set-up this week because you don’t normally lose two captains in the space of four or five weeks, but we have some senior players there in Jack Bird, Jack de Belin, Josh McGuire and Tariq Sims.

“Everyone understands what has happened the last four or five weeks at our club [after Vaughan’s barbecue]. We’ve been down that road, we’ve dealt with it. The point moving forward is it’s been dealt with. Tariq Sims is our captain this weekend.”

De Belin played 80 minutes last weekend and Griffin had been “really surprised and impressed” by how quickly the forward had regained fitness.

A NSW Origin player and Gerringong junior, Sims appears set to remain in the role the remainder of the year with Ben Hunt unlikely to return from a broken arm, despite pushing hard to return next weekend when the Dragons play in his home town, Rockhampton.

As for the return of Matt Dufty, Griffin said of the Bulldogs-bound No.1 he would “bring attack and a little bit more speed”.