Jack Kenningham reflects on his 'crazy' meteoric rise for Harlequins

Jack Kenningham is sitting in the autumnal sun at Harlequins reflecting on the last few months of his life – perhaps for the first time.

‘It’s crazy,’ he says when Sportsmail points out what he has achieved at the age of 21, eight months after his Quins debut.

‘The World Cup was two years ago when I was in my Bath University second-year house – we had training at 7am so we could get back to watch the semi-final. 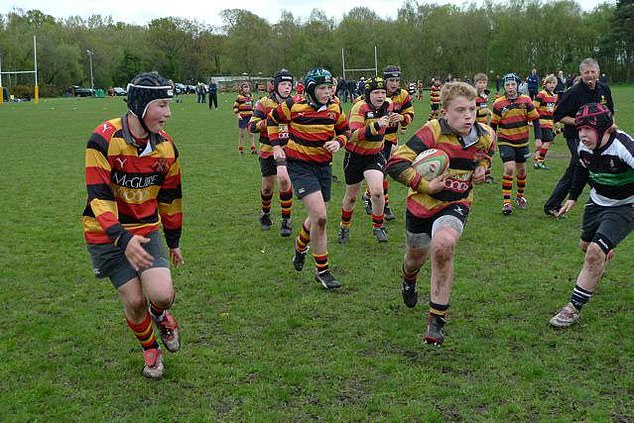 Jack Kenningham (with ball), seen here on a run for Richmond RFC as a youngster, has enjoyed a meteoric rise and is desperate for more success now he has had a taste of it 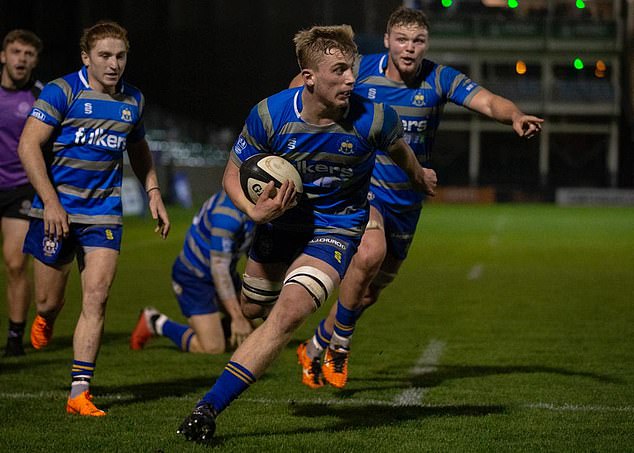 Seen here scoring for Bath University at the Rec, Kenningham moved quickly to the pro ranks 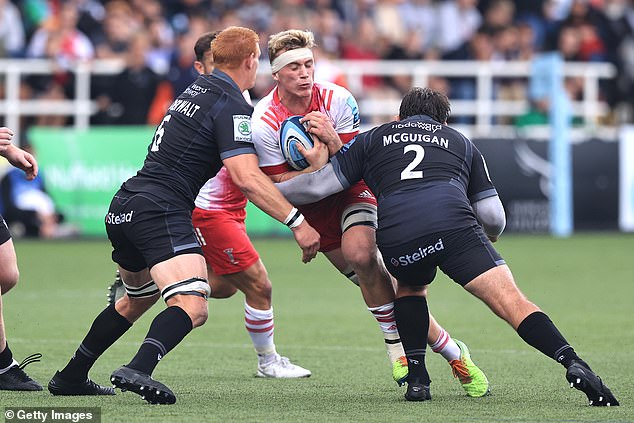 ‘We beat New Zealand and it was one of my favourite memories. All the uni boys came back to the house and we watched it together.

‘Then picked in the most recent England camp I was rooming with Sam Underhill. Not long ago I was watching this guy on telly!

A debut for his boyhood club in February, a Premiership title win in June, followed by two separate England call-ups in less than 1,000 minutes played as a professional – and he has graduated from his Sports Performance degree at Bath University.

This year has been one of transformations for Kenningham, who quips as he poses for photographs: ‘It’s good to get these in early as my ears are growing cauliflowers by the minute!’

But before he looks back, it is forward. Kenningham is 22 on November 19, the day before England face South Africa at Twickenham. A Test debut would be a fine birthday present.

‘For my birthdays, pre-Covid, I’ve been given tickets for the autumn internationals,’ he says.

Dad – David – comes up a lot in Jack’s first major newspaper interview. A surveyor, like his wife Sarah, who played amateur rugby for Saracens and Richmond he is Jack’s super-fan.

‘I have to calm him down sometimes!’ laughs the back-rower.

‘He gets very excited and nervous – as much as me before a game. When he had to watch on TV my sister Amy said it was a nightmare as he was pacing up and down, couldn’t sit still, every call that went against us he wasn’t happy about!

‘We always chat after games. He knows his rugby pretty well so if my dad says I’ve played alright, normally it means I have.’

When Jack was nine David took him to The Stoop, a short walk from the family home near Twickenham’s Marble Hill Park – a nest Jack has just flown to join a friend in a Wandsworth flat. 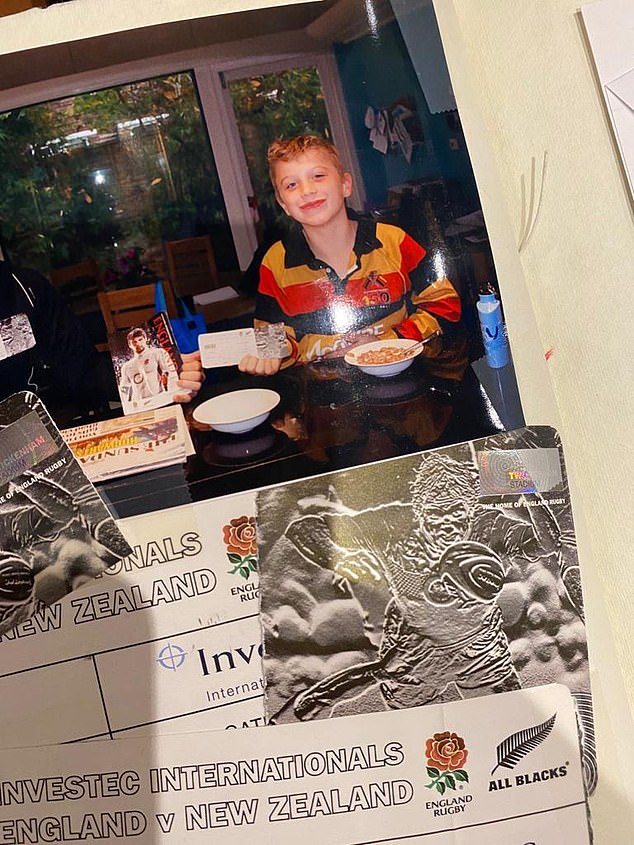 ‘There’s a couple of pictures of me holding my flag, in my Quins gear!’ Kenningham says.

‘Chris Robshaw was my hero. It’s crazy to think I play with Joe Marler and Danny Care, and am coached by Adam Jones and Nick Evans – guys I watched. It’s really special.

‘I’m pleased I can call them friends as well as team-mates.’

Kenningham was only discovered four years ago. At Reed’s School in Cobham he toured Argentina after his GCSEs as a beanpole, and when he returned only was picked up by Quins’ academy scout Jim Evans as he was watching another player from RGS Guildford.

Weighing only 13st at 18 he soon rocketed. A Monday night trial on the 4G pitch next to where we sit at Surrey Sports Park led to a dual University-academy deal with Quins.

Playing sporadically with Louis Lynagh and Marcus Smith as a teenager he expanded to 16st 7lbs and went from part-time to full-time at the club when Covid cancelled his in-person lectures.

Misfortune of flanker Will Evans’ fractured tibia led to fortune for Kenningham, a run in the Quins side from April. As Evans’ friend, Kenningham was determined to win him a medal. 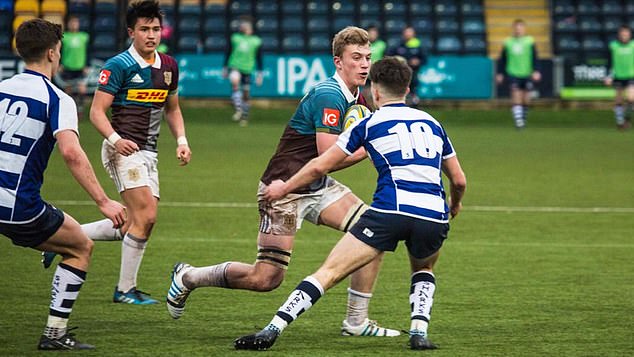 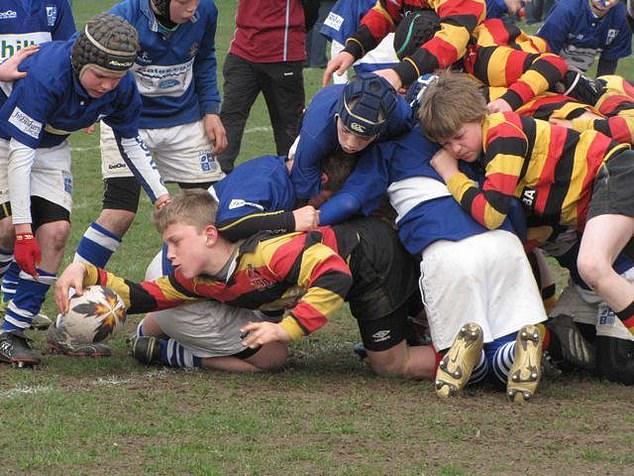 Seen here scoring a try for Richmond RFC, Kenningham has loved the game from a young age

‘Apparently my sister at half time went “not sure it was worth coming down”,’ says Kenningham, who played 90 of 100 minutes at Ashton Gate in the greatest club comeback ever seen – Quins winning 43-36.

‘After extra-time she went “probably was then!”

‘We scored either side of half-time and from then on there was genuine belief. Our fans were going crazy in one corner.

‘We did say that if there’s any team that can come back from that, score tries and put on at attacking display it’s us.

‘I remember the final whistle going after 80 minutes. We were knackered, but a couple of the replacement front-rows said “I’m still feeling fresh, we’ve got this!”

‘I thought “it’s alright for you, you’ve only been on for 10 minutes!”

‘Once we started to not worry as much we created history.’

And then they did it again, beating Exeter in the highest-scoring Premiership final, 40-38, at Twickenham two miles from where Kenningham grew up. 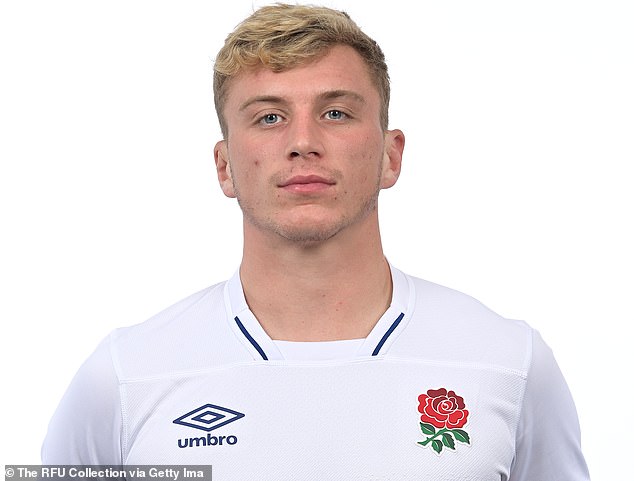 Both matches, in fact every game Kenningham has played on television, are saved by on the family Sky box – his father re-watching them with Jack when on work breaks.

‘If that ever got lost dad would have a sense of humour failure!’ Kenningham laughs.

‘I’d be mortified too as that game will live with me forever.’

The moment he leapt onto his team-mates at the final whistle is Kenningham’s phone screen-saver. His memory may be a little blurry after that, as drinks at The Stoop with the trophy, then a lock-in at the Cabbage Patch pub followed, before the squad bussed down to Brighton for an all-day drinking session the next day.

There Kenningham found out Eddie Jones had picked him for the summer squad. 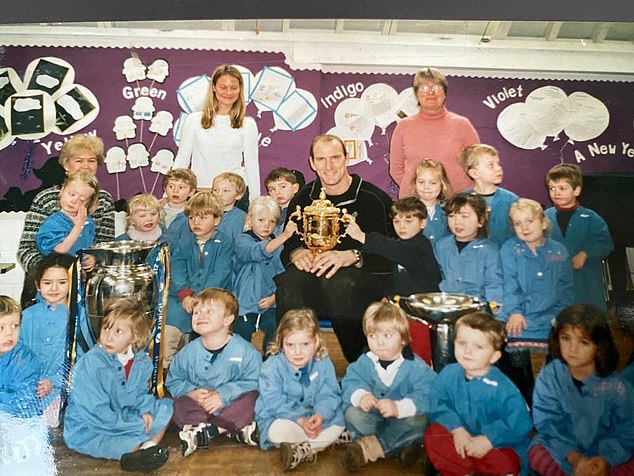 Kenningham and school friends, aged 4, were visited by Lawrence Dallaglio and the World Cup

‘All beers were put down!’ he laughs. ‘I called dad straight away, and off I went.’

Unfortunately Kenningham was ‘pinged’ by the NHS Covid app on the Thursday before the Canada Test – never to know if that was to be his debut.

‘That was really rubbish and so frustrating,’ he says.

‘It felt I left the job unfinished.’

It will not be long before his next chance comes.

Bristol on Friday night is just Kenningham’s 15th adult match. Still an academy player for another season, the boy who has rushed to stardom has time on his side.