Samu Kerevi and Izack Rodda will play their first Wallabies Tests since the 2019 World Cup in Perth on Sunday.

Wallabies coach Dave Rennie on Friday revealed his 23-man squad for the final Bledisloe Cup match of the year, and it was hard to look past the return of two overseas-based stars in the side that will strive to avoid a clean sweep at Optus Stadium. 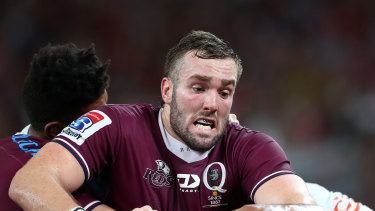 Izack Rodda is back in the Wallabies side.Credit:Getty

Kerevi will link up with Len Ikitau in the centres but Rodda will have to bide his time.

The new Western Force recruit will come off the bench. Rennie preferred Darcy Swain and Matt Philip in the second row.

Rennie decided to stick with stability in the halves, too. The public dummy that was putting Quade Cooper up for media commitments earlier in the week did not translate to a place in the squad for the playmaker. Noah Lolesio has retained the No. 10 jersey.

At halfback, Rennie has rewarded the strong form of Tate McDermott. Nic White was the first choice option through Rennie’s first season in charge but he will have to come off the bench again on Sunday.

Wallabies team to play All Blacks at Optus Stadium

Up front, Brandon Paenga-Amosa has been omitted from the squad entirely. An all-Brumbies front row of James Slipper, Folau Fainga’a and Allan Alaalatoa has been named.

Rennie has also named an identical starting back row. Captain Michael Hooper will partner with Lachie Swinton and Rob Valetini.

Curiously, Harry Wilson has dropped off the bench to accommodate the inclusion of Pete Samu.

Jordan Petaia and Lachlan Lonergan have also been named on the bench. 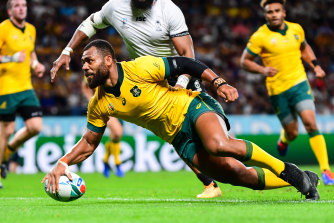 Samu Kerevi scores against Fiji in Australia’s opening clash at the World Cup. He hasn’t played for the national 15-man side since that 2019 tournament.Credit:Rugby AU Media/Stuart Walmsley

There were no surprises in the back three. Tom Banks has kept his place at fullback. Marika Koroibete is on one wing and Andrew Kellaway is on the other.

“It’s great to be able to call on the experience of Samu and Izack this weekend with Hunter and Lukhan leaving the group to be with their partners in what’s a really exciting time of their lives,” Rennie said.

“Both Samu and Izack have worked really hard since joining the group, been positive additions and have earned their opportunity to pull on the gold jersey.

“The past three weeks in Perth have given us a chance to train hard on the field, refresh off it and connect with the local community.

“We are excited about the chance to be back on home soil and put in a performance that all of our supporters can be proud of.”

Stan Sport is the only place to watch every match of the Bledisloe Cup and The Rugby Championship continuing this Sunday 5 September with Australia v New Zealand – streaming live, extended and ad-free on Stan Sport from 3:15pm AEST.