Wallabies winger Marika Koroibete is free to play in the Bledisloe Cup opener after a World Rugby judiciary hearing did not uphold his controversial red card.

Koroibete was sent off in the fifth minute of series deciding win against France at Suncorp Stadium for a high tackle on French captain Anthony Jelonch.

But at a World Rugby hearing on Monday night, the judiciary cleared the superstar winger after finding the initial contact was made with Jelonch’s shoulder.

“The player Marika Koroibete admitted to technically committing an act of foul play worthy of a red card. Having reviewed all the evidence, the committee deemed that Marika Koroibete’s tackle on French loose-forward Anthony Jelonch initially made shoulder to shoulder contact at the fifth minute of the game,” a World Rugby statement read.

“Subsequently, through the impact, any contact to the chest and neck was incidental by Koroibete. Therefore, World Rugby’s Head Contact Process was not met due to mitigating factors, and the act of the foul play was secondary.

“On that basis, the committee did not uphold the red card and the player is free to play again immediately.”

Koroibete’s red card drew widespread criticism. Sonny Bill Williams was one of many former players to slam the decision. 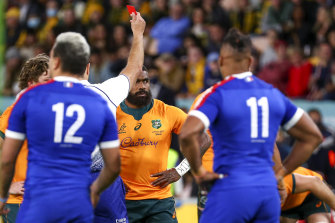 The red card against Marika Koroibete was overturned by the World Rugby judiciary.Credit:AP

“We’re in a tough place in the game at the moment where we’re trying to get that balancing act between protecting the players and protecting the game,” Williams said on Stan Sport.

“It’s pretty frustrating,” O’Connor said. “If you’re playing in the spirit of rugby, that’s not something you do. To me, it looked like blatantly he’s been hit and because he’s dropped the ball, he’s reacted to that.”

Rennie said afterwards he felt Jelonch had milked a penalty and that Wallabies officials would fight the charge at a judiciary hearing.

Never miss a medal or great sporting moment with our Olympic update emailed daily. Sign up for our Sport newsletter here.