Queensland’s quarantine laws are on the Brisbane Lions' radar as the club tries to negotiate challenges associated with the return of more than a third of its list back to the Sunshine State.

Sixteen Lions players have headed interstate to their respective homes during the AFL's indefinite coronavirus shutdown period, however their eventual returns to Queensland are set to be complicated by a mandatory 14-days of self-isolation for any person entering the state. 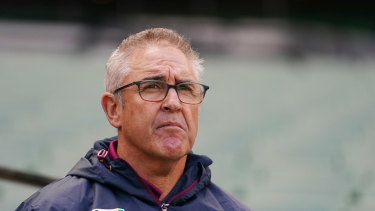 This wouldn't be as much of an issue if the Lions knew when football was going to resume because if they did, they could make sure players head back and are through quarantine ahead of their resumption of training.

But while the season is suspended until at least May 31, there is no guarantee football will re-start at the top of June.

May 4 has been identified as the day on which players would return to their clubs to resume training in the event the AFL gives the green light for an early-June resumption, although current social distancing restrictions would need to be lifted for training and matches in order for football to be viable.

The league is set to report back to clubs at the end of April to provide an update on resumption timelines.

Lions coach Chris Fagan said on Wednesday that players who had headed interstate had started thinking about the need to plan their respective returns.

"I know just chatting to the guys who aren't in Brisbane at the moment, they're all starting to consider that now based on their own individual circumstances," Fagan said.

"It's probably better to do it sooner rather than later, it probably is a little easier if they were still up here because they could still train in pairs and do things like that.

"A couple of boys that have gone back to their home states are coping really well and got great training set-ups, and others are feeling a little bit disconnected, which is natural enough."

Meanwhile, Fagan reiterated that Lions players had been encouraged to find work elsewhere during the hiatus.

"[Youngster] Jaxon Prior went back to Perth and he used to have a part-time job at Bunnings and I think he's picked up a bit more part-time work while he's back at Bunnings," Fagan said.

"It's really good for their overall holistic development to go out and get into the workforce and see what that's like… a few other boys in Melbourne are looking for jobs at supermarkets."

Fagan said clubs would be challenged by games being played in quick succession later in the year, which has been flagged by the AFL in a bid to ensure a 17-round season can be completed.

"It will be a challenge for all of us because we have never had to do it before," he said.

"We will be flat out working out ways in which we can recover and come up and play well again.

"But on the other side of that, I know players are pretty excited about the fact they will be playing games closer together because I think a lot of them enjoy playing games than train.

"They will see benefits to it I am sure, we are just not sure what they will be – we will do a lot of learning in the first few weeks we come back."