Carlton coach Michael Voss has declared Mitch McGovern is “super keen” to reinvigorate his career at full-back in a team set to embrace a selfless culture.

The Blues had their first official day on the job under Voss on Monday. While it technically was the start of pre-season training for the first to four-year players, the likes of Patrick Cripps, Jacob Weitering, Harry McKay and a streamlined Zac Williams also took to the field. Recruits Adam Cerra and George Hewett also impressed. 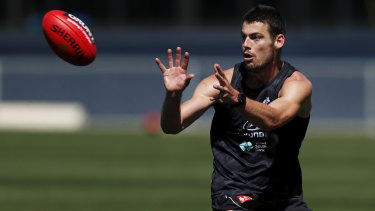 The unexpected retirement of Liam Jones, who opted against following the AFL’s coronavirus vaccine mandate, has left a significant spot to fill in defence.

Jones was an elite one-on-one defender but the Blues have options to replace him, including former Bulldog Lewis Young and Caleb Marchbank, the latter having not played a senior match in two years because of knee injuries.

However, it appears McGovern, a high-priced recruit who has underwhelmed largely as a forward in his three seasons at Princes Park so far, will have first dibs.

“Obviously, Lewis coming in is one of the names straight away,” Voss said.

“We are certainly happy to explore Mitch McGovern as one of the names going back. I have had those conversations with him already, and he has been super keen to maybe take on a challenge like that.

“Then there are the guys we maybe haven’t seen a lot of in recent times. Obviously, ‘Marchy’ is just starting to get himself going so will see him up and going probably post-Christmas pretty well. There are a few names there to use … but we have to get them skilled up in those areas.

“As I said, we have got to see what the collective movement is for this group. It won’t be about what individuals do, so to speak.” 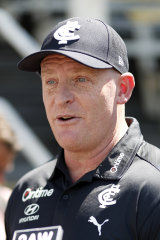 McGovern has managed only 33 matches (37 goals) in three years with the Blues, where poor form and injury have hurt. He is contracted for two more years.

As outlined in the Blues’ external review, and confirmed by club president Luke Sayers, it was argued Carlton had an overly offensive bent under David Teague last season, leading to his sacking after a season where the team failed to meet expectations and make the finals. The Blues too often conceded a run of five goals or more, including seven straight to bottom-placed North Melbourne in a stinging 39-point loss in round 19, and 19 straight in a humbling 95-point loss to Port Adelaide in round 22.

The players also seemed confused, at times, with their roles, where a man-on-man ethos, and a lack of defensive accountability from some midfielders left them vulnerable in other areas of the ground.

Voss said he was preaching a balanced and reliable game plan that members and supporters would understand.

“It won’t be all about defence at the expense of what we want to get in our offence … but it’s underpinned by we need to get our hands on the ball first, and then we play off from there,” he said.

Voss has been working hard behind the scenes to implement higher standards and a revamped culture, and said he was yet to consider whether Cripps and Sam Docherty would remain as co-captains.

Gun midfielder Sam Walsh, the reigning John Nicholls medallist, said he and his teammates were determined to have a better understanding of what it meant to play for each other.

“I think the biggest one for us … is really starting to learn to play as a team and play for each other. That comes with playing consistent footy throughout the year and being reliable to each other,” he said.

“It comes with probably a bit of group ownership and now a bit of direction from us on what hasn’t worked in the past. To really grasp it, you need 44 blokes on the list really charging towards it. I believe we have had that … but the consistency hasn’t been there for various reasons.”

Walsh, who grew up a Brisbane Lions supporter with a signed poster of Voss on the wall of his Ocean Grove home, said he was keen to lift his contested work rate next season. He needn’t look too far for assistance as Greg Williams, the former superstar and now football director, was also on the field and kept a close eye on training.

Docherty made a heartwarming return to the club, having fought a second bout of testicular cancer. He hopes to return to training soon, and has already been discussing team tactics.

“His positive approach to it, to be pretty honest, has been fairly inspiring,” Voss said.