Melbourne in the eight, for now, as they dismantle Essendon

Melbourne are in the top eight after dismissing a disappointing Essendon in the final round leaving the Western Bulldogs with the job of defeating Fremantle in Cairns on Sunday to claim the Demons' spot.

After giving up the lead at the end of the first quarter when the Bombers' Jake Stringer goaled, Melbourne came out after quarter-time and made Essendon look silly in the second quarter.

They kicked five unanswered goals in a match-winning burst against an opponent that may as well have been swimming between the flags at Surfers' Paradise as they floated along and played safe football. 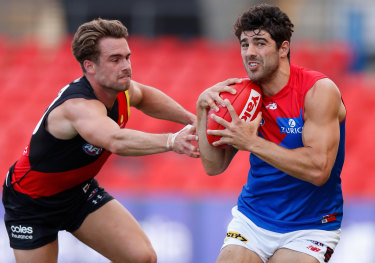 But that all changed in the final quarter when Essendon moved Joe Daniher – who had been ineffective with just two touches up until that point – into the ruck and they began to reel in a 28-point lead kicking five of the next six goals to draw within seven points with three minutes to go.

It took a tackle from Trent Rivers to create a loose ball and Bailey Fritsch pounced to kick the sealer for the Dees and book a spot in the eight for one Saturday night at least.

Until Essendon woke up Melbourne did as they pleased with Christian Petracca dynamic whenever he was given space forward of centre and Max Gawn handing the ball to Clayton Oliver and Jack Viney on a plate to deliver the ball inside 50.

Luckily for Essendon Fritsch was wayward kicking 1.3, as he strayed in Queensland again. 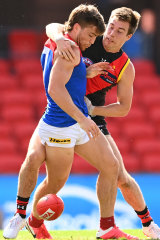 The Bombers started Michael Hurley forward and pushed James Stewart back in an attempt to ask the Demons a few questions but it didn't work with Hurley back in defence before half-time.

Anthony McDonald-Tipungwuti was the Bombers' only dangerous player with his kicking inside 50 setting up teammates to score. Daniher was ineffective walking off at half-time in discussion with Hurley without a possession to his famous name.

Essendon's midfield were being beaten with the big names Dylan Shiel, Devon Smith and Jake Stringer playing as individuals too often although they lifted for the second half while Adam Saad played as though he had weightier matters on his mind with his contract situation unresolved.

In the first three quarters the pressure Essendon applied was the equivalent of a junior football team but they showed when they took the game on and tackled they could worry Melbourne.

Unfortunately it was too little too late.

Melbourne are alive in 2020. For how long remains to be seen.

At half-time Daniher did not have a touch. That was only part of the story however because he appeared more intent on getting through the game than having an impact. To be fair he was up against two good defenders, Steven May and Jake Lever, who made sure he was given no space to run and jump at the ball. In the end Ben Rutten put Daniher in the ruck as he attempted to bring him into the game. It worked to some extent with Daniher picking up seven touches in the last quarter but if he decides to leave at season's end it was an ignominious finish at a club where his name became famous.

Middling Melbourne ahead of embarrassed Essendon

The Demons had to wait to play Essendon after their match was postponed when now-retired runner Conor McKenna tested positive to COVID-19. Since that day the Demons have won eight and lost seven while the Bombers have won just four. While Melbourne have had their troubles they will head home, whether they make finals or not, with some pride in the way they have finished the season and with some clarity on their list. Essendon on the other hand only won one and drew one of their final 10 games. Again an off-season of change awaits Essendon.

The Bombers said farewell to one of the AFL"s most respected figures John Worsfold with a guard of honour as he left the ground with Tom Bellchambers also being applauded from the ground despite the coach deciding the ruckman wasn't ready for a farewell game.