Nathan Buckley: We would be happy to have an asterisk next to our name

No one knows when the season might resume, what it will look like when it does and whether an endpoint of 17 games and finals will be reached.

No one knows who will be involved at clubs for the rest of the season and beyond.

No one knows which players will return in good shape or what rules they will be asked to play under.

No one knows whether three grand finals will be played or where matches might take place in the home and away season.

Not even Collingwood coach Nathan Buckley, who makes it his business to know as much as he can about football, knows what lies ahead, and until he does, he is not going to buy into the ideas the AFL and club football managers raised this week in a brainstorming session, looking at what might happen when football returns.

But one thing Buckley is certain about is that if the competition does get underway and a premiership is decided he will be chasing it as hard as he ever has in his playing and coaching career regardless of how the season is structured.

"We would be happy to have an asterisk next to our name," Buckley said.

Buckley does know that the clubs will be given an official update on April 27 as to whether the AFL is any clearer on when training and the season might resume.

And if they were given the tick then to play – which everyone including Buckley considers unlikely – they would need a month to ready their players for competition, a lead in time that might stretch if the break expands beyond a couple of months.

Until then Buckley is preaching routine and connection and gratitude, focusing on the opportunity as much as the challenge in such an uncertain time.

At 8am every morning the football department's skeleton staff at the Magpies have a phone hook-up to deal with the uncertainties as best they can, advising the players and staff to eat well and sleep well so they have the best chance to "be thriving in a circumstance that is not natural".

Buckley sets himself to speak to 15 people from the club – either players or staff – to ensure they are happy and healthy and settling into as normal routine as possible in such unusual times. 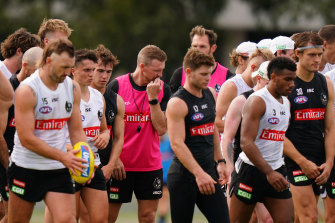 "Our major purpose through this first month is to have them happy, healthy and exercising consistently to a routine," Buckley said.

Buckley said it is too early to say how clubs will bounce out of the period but he is confident that the connection the Magpies have established in recent seasons will stand them in good stead when play does resume. Right now he is taking things day by day.

"We are making sure that we look after today as well as we possibly can and are keeping our players in great emotional and mental shape as well as physical shape," Buckley said.