Brisbane Lions midfielder Lachie Neale admits that winning the Brownlow Medal on Sunday night could alter his life but it would not change who he is as a person.

He also suspects being one of the favourites midway through last season has helped him cope with being the focus of discussion this year, as he set his sights on helping Brisbane land their first flag since 2003.

The 27-year-old enters the count as a warm favourite to win the medal, having finished equal third last season alongside Carlton's Patrick Cripps and behind Nat Fyfe and Geelong's Patrick Dangerfield. 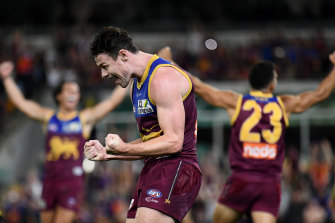 Neale, who racked up the most disposals in 2020 and was in the top five contested possession winners, will be at the Gabba, among his teammates, as AFL CEO Gill McLachlan reads the votes from Metricon Stadium on the Gold Coast in the COVID-19 version of the Brownlow Medal count.

"I am sure it will change my life if it happens in some ways but it won't change who I am or anything like that," Neale said.

The popular Lion moved to Brisbane in 2019 after 135 games with Dockers where he won two best and fairests and finished in the top 10 of the Brownlow in 2016. He won the Lions' best and fairest last season and is as good as certain to win the 2020 award also.

Having watched the impact winning the medal had on former Dockers' teammate Fyfe, when he first won it in 2015, Neale is not naive to the attention he might receive.

"I obviously played with dual Brownlow medallist now in Nathan Fyfe and [have] seen how he goes about it and he obviously receives a lot of attention, but being in Brisbane … I am a pretty low key player as it is," Neale said.

Neale showed his talent would not wilt under pressure when he recovered from having zero disposals at quarter-time in the qualifying final against Richmond to kick a vital, long goal just before half-time on his way to being influential in the Lions' upset win.

He said he had been able to take all the talk of him winning the Brownlow with a grain of salt.

"Last year probably prepared me pretty well for it [when] there was talk last year that I was a chance for it," Neale said.

"I have never been in that sort of conversation before so I think I learned a fair bit from last year."

He also said being favourite guaranteed nothing so it would be stupid to give it too much thought.

"You never know what is going to happen on the night. Fyfey was fourth favourite [and] ended up winning [last season] by a comfortable margin. That set me up for this year. You don't have any control over it," Neale said.