‘Neutral venues’ would be fairest for finals: Scott

Geelong coach Chris Scott says playing finals at neutral venues would be the fairest way for the AFL to fixture the series, but the Cats will express their preference if GMHBA Stadium can’t host crowds.

The Cats, currently second, will be a top-ranked team at some stage of the finals, but Scott said the notion that teams get to choose where they will play if they earn the right to a home final is a furphy. 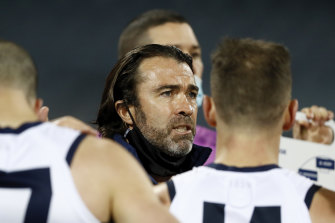 Chris Scott says neutral venues would be fairest for the finals this season.Credit:Getty Images

“I think it is an assumption, that is not based in fact, that the home team gets to choose where they play. They may well have some say in it, but there are other factors that will trump the preference of the home team,” Scott said.

“The probability is that the finals series will be played on neutral venues.”

He indicated that would be the fairest system from his point of view.

“The AFL may well choose to play games at venues that gives one team the home-ground advantage but that flies in the face of the finals being played on neutral venues,” Scott said.

They are also expected to give teams from Victoria and NSW the opportunity to express their preferred venue if they are the top-ranked team heading into a final, though the options will be limited to venues that can host crowds. However, the decision on where each game is played will be a negotiated outcome that takes into account likely crowds and revenues.

Scott conceded the Cats would do a thorough analysis on where they might prefer to play outside of Victoria if that is a choice they are presented with, but the decision would depend on their opposition among other variables.

“Just because we don’t feel confident that we will get the absolute decision-making power on this one does not mean that we won’t go through the process of if we earn the right where we would prefer to play,” Scott said.

“It’s not [a] clear [decision] because we think we have got a good history at the three likely venues being the Gabba, Adelaide Oval and Optus Stadium, so it is probably going to be at the margins for us.”

Geelong have lost their past two at the Gabba but had a good record at the venue leading into last year’s grand final while they have won two of six at Perth Stadium and defeated Port Adelaide at Adelaide Oval in their only match their this season.

Scott said Cats forward Gary Rohan and versatile defender Tom Atkins will be available against Melbourne while Gryan Miers will probably need another week after suffering a leg injury in round 19 against Richmond.

Geelong also expect Mitch Duncan and Zach Tuohy to return for finals although the elimination of the pre-finals bye means Duncan’s return will be deeper in the finals series while Tuohy remains touch and go to play in week one of the finals.