Exeter celebrated their 10-year anniversary in the Premiership by reinforcing their position of dominance at the top of the table – and condemning Northampton to a sixth consecutive home defeat.

For the Saints, this is now a record sequence of league results at Franklin’s Gardens and all but ends their fading title hopes. For Exeter, another emphatic demonstration of squad depth saw their reserve line-up claim another major scalp on the road, following the epic victory over Bristol at Ashton Gate 10 days earlier.

Rob Baxter’s imperious Chiefs thus marked a club landmark in fitting fashion. Exactly a decade after beating Gloucester in their first ever Premiership fixture, the Devonians won in the East Midlands with a team featuring two veteran survivors from that momentous occasion; Gareth Steenson and Phil Dollman. 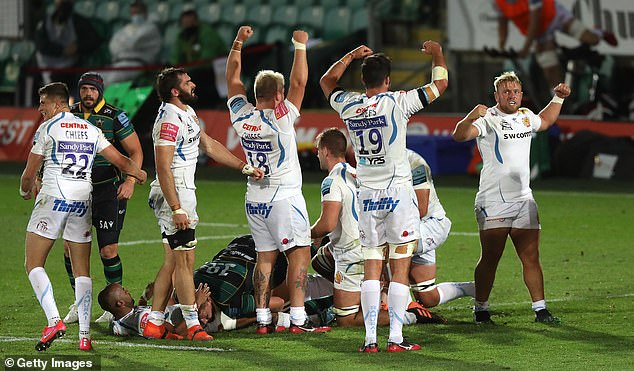 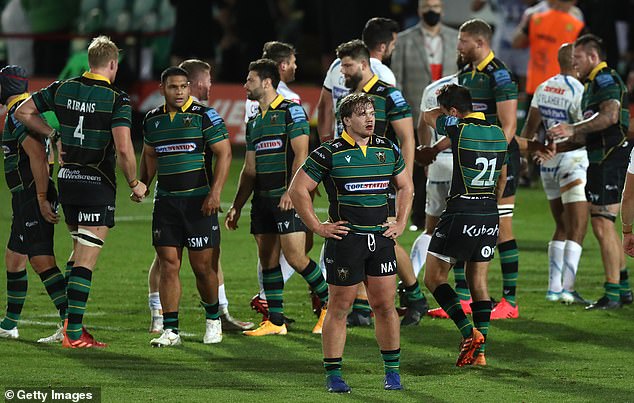 It wasn’t long before there was more writing on Northampton’s walls, as the fluent visitors claimed a double-digit lead. In the seventh minute, Exeter surged in front with a sweeping, long-range try.

Tom O’Flaherty made good ground on the right and after Tomas Francis crashed on, Sean Lonsdale was released through a gap and he barged past George Furbank’s attempted tackle to touch down.

Steenson converted and was heavily involved in the Chiefs’ next try five minutes later. The fly-half’s inside pass allowed outstanding Exeter blindside Jannes Kirsten to gallop through the splintered Northampton ranks and clear to the posts, with Steenson adding the extras. 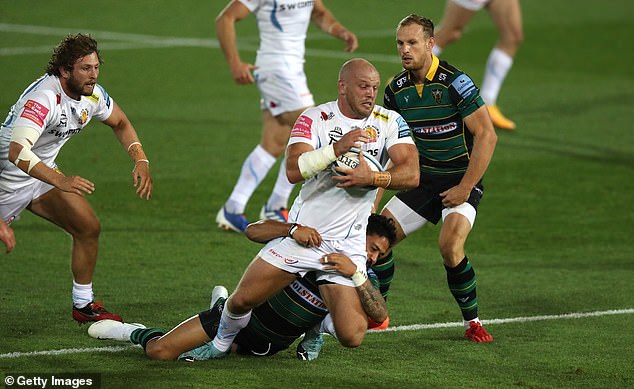 Exeter celebrated their 10-year anniversary in style with victory, continuing their dominance

The hosts appeared in danger of capitulating but, to their credit, they rallied. A multi-phase, route-one onslaught paved the way for David Ribbans to smash over, for a try converted by Dan Biggar.

Then, a minute before the break, Biggar’s pass put James Fish in space and the hooker sent scrum-half Henry Taylor off to the line, to make it 12-14. 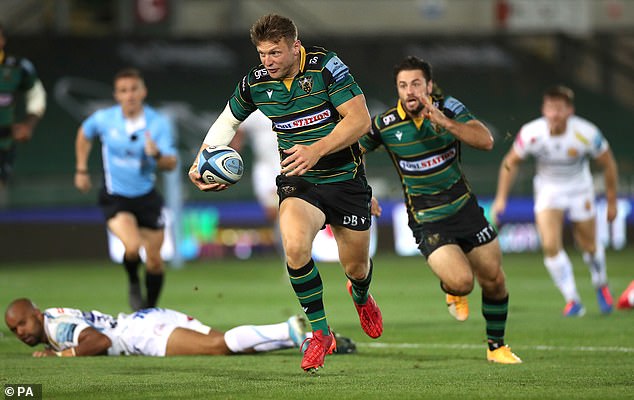 But the Chiefs have the winning habit. A Steenson penalty reduced the deficit then, nine minutes from time, O’Flaherty darted over in the left corner. The match-winner said: ‘It was a good old-fashioned ding-dong.

No matter what team we put out, we go and enjoy it. We have to keep pushing forward.’ Asked if the play-offs are now out of reach for Northampton, a dejected Boyd said: ‘I think so. We’ve probably left ourselves too much to do.’