The NRL has defended its decision to downsize its annual two-day education camp for up-and-coming players to a three-hour online session. 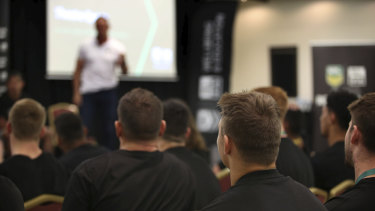 Abdo said there would also be "additional training" provided by the NRL throughout the year.

"All that's happened is instead of it being two concentrated days, this is a shorter session, but it was virtual," he said. "But there will be more and more regular sessions and more regular contact with the players, which is probably, to be honest, potentially an even better model."

The NRL's Rookie Camp brings in players aged 18 to 24 on varying levels of NRL contracts, who will likely make their debut in first grade either next season or the season after.

This year's group also received a stern address from Abdo, who outlined the level of "responsibility" required to play first grade.

"The message I gave to them was that … they're on the brink of becoming professional rugby league players and on one hand that's a wonderful opportunity, and on the other hand, a lot of responsibility," he said.

"Making sure everybody understands that they are role models and whether they like it or not, the standards that apply to us in professional sport, and especially to players, are higher than the public."

Last year, the group was told they would be the first year affected by a new ruling that states under-20 players must take part in at least one day of work or study a week to be eligible for selection in a first-grade NRL side.

The NRL's wellbeing and engagement manager Tony McFadyen said the responsibility of educating the players would be weighted more towards individual clubs going forward.

"We've got mandatory programs that we roll out anyway and it will be the staff at clubs doing it," he said. "They've got now got a whole matrix of things that they can select, to use or to bring into their clubs."

McFadyen said that while the education session had been reduced, the "key messaging" was still delivered to the players.

"We've got to hit some key things that the compliance side, but it's also the way you do it, it's about behaviour and behaviour change," he said. "We don't go in and say that you can't do this, we say 'look if you going do this there are responsibilities that come with that'.

"You're responsible for your actions. So here's the reason why making those decisions is so crucial."