The NRL is just months away from trialing new technologies whose inventors claim can definitively determine whether a pass has been thrown forward.

While the Bunker has revolutionised the way rugby league is officiated, the video referees are still unable to rule on the seemingly subjective area of forward passes. That could soon change after two separate firms approached the NRL with supposed solutions to the age-old problem. 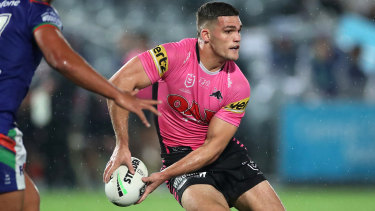 Arguments over forward passes could soon become a thing of the past.Credit:Getty Images

“All we have agreed to at this stage is a trial of the technology in training matches to determine whether the technology meets our needs. If we’re convinced it is accurate and suitable, we would need to build a business case to take to the commission.

“Both technologies have potential beyond forward passes, also other parts of the game.

“The microchip technology was initially developed as a high-performance coaching aid. The discussions I’ve had with them have been purely around officiating.

“There is a long way to go and it’s purely a trial, it’s nothing more than that.”

Hawk-eye technology has revolutionised the way cricket and tennis are officiated and Sportable believe they can have a similar impact on rugby league. Similar technologies are already being used by leading rugby union teams to provide their coaches with real-time performance data.

“It’s cheaper than other technologies in the market, it’s less expensive for the league than GPS technology they currently use,” Husemeyer said.

“The other key point is what we’re creating is a sponsorable asset; when you think about Hawkeye, in many cases that would be cost-neutral to the league because it’s being covered by a sponsor.”

COVID has been a complicating factor in bringing the technology to Australia, but the trials could go ahead as soon as August.

“It’s a microchip in the ball and then there are a series of portable trackers placed around the stadium to track the ball,” Annesley said. “In theory, it can determine when the ball leaves the players’ hands, whether the initial movement of the ball is backwards or forwards.

“That’s bearing in mind that the ball can float forward due to the velocity of the ball. They claim it’s accurate enough to determine whether that initial instant the ball leaves the hands is in a backwards direction.

“We are looking to trial it this season.”

If successful, the technology has the capacity to take pressure off referees, who have been instructed to be more diligent in acting on incidents of foul play.