Out of their depth? The best XV at this week’s Wallabies camp

Dave Rennie’s 40-man Wallabies squad that will assemble in Coogee on Sunday for a three-day camp lacks depth.

On paper, it certainly doesn’t feel like a fully fledged international squad and Rennie will know he has work ahead to build that depth. 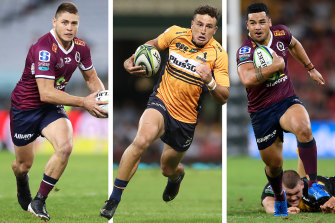 Sometimes you don’t know if players are good enough until they come into environments like these camps. On the flip side, there are individuals who don’t shine at Super Rugby level who are more suited to Test rugby. The trick is finding who they are.

The purpose of such camps is to increase depth and see how players respond on a tactical and technical level. It also gives coaches the chance to explore combinations that differ from Super Rugby.

An example is that of No.7 Fraser McReight, who will no doubt be getting to work in a different style of back row with different kinds of players this week to what he is used to at the Reds.

These kind of camps can also test guys who have benefited from playing in stronger teams – such as Brumbies duo Andy Muirhead and Lachlan Lonergan, as well as rising Reds forward Seru Uru – and be a big benefit to players from struggling teams, such as Angus Bell and Dave Porecki from the Waratahs.

I’ve had a go at naming a Wallabies team strictly from the players attending this camp, based on form and potential. I’m aware the likes of incumbent captain Michael Hooper and Dane Haylett-Petty could come into the mix later and won’t be in Coogee for a few short days, but here are the players I’d be giving an opportunity to when France arrive on Australian shores in three months.

While I’ve gone for the Queensland Reds hooker, I do think Folau Fainga’a will get a look in this year. The same goes for Scott Sio. I wouldn’t be opposed to the idea of bringing Tupou off the bench. Rugby, more than ever, is a 23-man game, so coming off the pine wouldn’t be out of the equation for the Tongan Thor.

Both have had terrific seasons to date. However, I also quite like what experienced veteran Sitaleki Timani brings and would be interested to see how he goes away from the Western Force. We know at lineout time the slightest split-second confusion or hesitation by any player can throw the whole operation into disarray, so it’s critical that whoever Rennie wants to start against France gets time to build combinations and get their knowledge up to scratch.

Valetini has been a workhorse this year and, given Hooper is still in Japan, we’ll avoid the McReight-Hooper debate for now. Valetini is an extra lineout option and you could even throw Salakaia-Loto into No.6 if necessary. The other two have been brilliant once again in Super Rugby AU, showing no signs of second-year syndrome.

I’m happy for the incumbents and senior figures of this Australian team to get another go in 2021. I still see Matt To’omua as more of a No.12 and do like him as a second decision-maker.

This might be a bit left-field, but I’d love to see how a Paisami-Ikitau pairing would go. I know it makes sense to use a midfield pairing that has been tried and tested at Super Rugby level, but I think they could flourish together.

Koroibete is one of the best in the world, while Wright shone last year and deserves another chance. It’s a tough field and some big names such as Filipo Daugunu, Jordan Petaia and Suliasi Vunivalu need to seize their chance to make the Wallabies starting XV. On the basis of Haylett-Petty still being out with ongoing concussion symptoms, Banks wears my No.15 jersey.

Alaalatoa is a no-brainer, Uru could be used as back row cover, while Pete Samu is an on-baller who could be devastating late in matches. Jake Gordon is a different kind of halfback to White and just shades Tate McDermott in my eyes. Gordon’s impact against the Brumbies was profound. To’omua’s experience will be desperately needed and if Vunivalu can be unleashed against tired defences, who knows what havoc he could wreak. I don’t have room for Reece Hodge.

Who could force their way in?

From NSW, perhaps Jack Maddocks, Jack Dempsey and Will Harris. The latter was probably a week or two late to show what he could do but he will certainly be on Rennie’s radar. Joe Powell and Richard Hardwick from the Rebels probably have claims to be there. Stacey Ili has been good too but doesn’t get enough opportunities at the moment. Liam Wright, although injured for the season, and Brandon Paenga-Amosa will both be disappointed.

A lot can change in three months though.