‘Past frustration’: Warriors preparing for another year on road

ARL Commission chairman Peter V’landys is confident Australia and New Zealand will lock in a two-way travel bubble that will allow the Warriors to return home at some stage during the season, as the club prepares for the worst – another year based in Australia.

The Warriors will relocate from Tamworth to Terrigal on Tuesday, where they are due to remain for the first four rounds. The Warriors are then scheduled to host the Manly Sea Eagles at Mt Smart Stadium in Auckland on April 9. 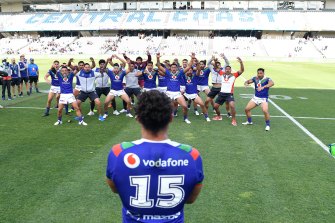 The Warriors are currently in Tamworth and will relocate to the Central Coast for the first four rounds of the 2021 season.Credit:NRL Photos

The Warriors have been able to bring their families over from New Zealand in recent weeks to join them ahead of the season. But George said he did not want to give the prospect of a two-way bubble “any energy”.

“We haven’t played there [Mt Smart Stadium] since August 2019. That’s 19, not 2020,” he said. “We are praying for it. We want to go home but the reality it is we are not letting it worry us because we can’t afford to sit here and listen to the news every day of the week. The problem is you don’t unpack your bags.”

V’landys remains bullish on the chances of the Kiwis hosting games this season, believing the Pacific bubble will become a reality in the coming months.

“ I am confident that will happen,” V’landys said. “Once New Zealand extinguish this one [case], which they’ve done so well in the past, there will be a travel bubble between Australia and New Zealand.”

Australia shut its borders off to New Zealand for 72 hours following the positive case but began re-allowing New Zealanders to travel across the Tasman without the need for quarantine from Sunday afternoon.

“There’s already [a bubble] coming from New Zealand, it’s going back to New Zealand that’s the issue,” V’landys said. “All we’ve got to have is for New Zealand to reciprocate it, which I am sure they will.”

Last week, V’landys told the Herald he would be advocating for NRL players to be vaccinated after health care workers and the elderly to allow for the Warriors to host home games.

The request would be for NRL players to be included in the third phase of the vaccine roll-out, which includes half a million critical and high-risk workers.