Injured Melbourne captain Daisy Pearce is “highly unlikely” to play in her club’s qualifying final this weekend but hopes to play in the Demons’ next match, should they advance to the second week of finals.

Pearce went over on her right knee in Saturday’s two-point win over Brisbane and scans showed she has damaged her medial collateral ligament. 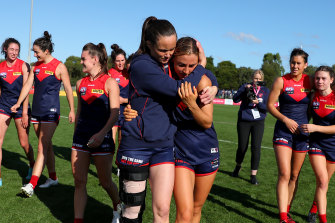 The finals fixture has not yet been set, but Collingwood fell from top spot and a week off to third place after losing to Adelaide at Norwood Oval on Sunday.

The 14-point win gave the Crows top spot and knocked the Magpies’ percentage low enough to fall below Brisbane, who claimed second spot and direct entry to the second week of finals.

Melbourne general manager of AFLW Daniel McPherson said Pearce was still hopeful of playing a role in the final series but would see a knee specialist on Monday to help chart a course for her return.

“It appears highly unlikely that Daisy will be fit to play in next weekend’s qualifying final, but at this early stage, we are hopeful that she may be available for the second week of the finals, should we make it through.”

“Daisy will meet with a specialist tomorrow [Monday] to undergo further assessment and, alongside our medical team, will then map out a rehab and return to play plan for her.”