Waratahs forward Hugh Sinclair has dismissed Andrew Ready’s punch to his jaw as “pillow-fists” and said the Western Force hooker apologised for the red card incident that left his partner fuming.

Ready’s moment of madness came in the 64th minute of the Waratahs and Force match last Friday when a bit of push and shove after a ruck ended with a punch on Sinclair’s chin. 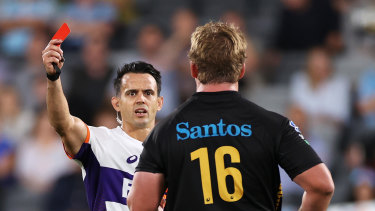 Force hooker Andrew Ready is sent off against the Waratahs. Credit:Getty

Referee Nic Berry had no hesitation in sending off Ready, who smiled as he jogged from the field with the game in the balance.

The Force, reduced to 14 men for the remainder of the match, came away from Bankwest Stadium with a dogged 20-16 win. Ready won’t be with the group until round eight after being suspended for three matches. Sinclair is still confused as to what made him lash out.

“It got a bit out of control didn’t it,” Sinclair said. “I thought I got held back after the ruck and then he cleaned me out. I sort of tried to land on him and missed and then he was on and swung a few.

“Maybe he went for the jersey punch. [He got me] straight to the jaw. I didn’t really want to throw one from the deck because I was going to be in even more trouble I reckon. I tried to get on my feet. It happened quick.”

A few years ago in club football, Sinclair broke his jaw and had to get a plate inserted. He said it was a good thing Ready’s punch didn’t have much behind it.

“I’m glad it was a few pillow-fists and didn’t crack it open,” Sinclair said. “He said sorry after the game.”

Sinclair’s partner was not impressed by the punch.

“The missus was on Instagram, she was blowing up,” Sinclair said. “She wasn’t too happy but calmed down a bit once I came home. I sort of got up and I didn’t realise he got me that good.”

Ready’s red card was the second of the weekend in Super Rugby AU, with Brumbies captain Allan Alaalatoa also given his marching orders for a high shot on Rebels prop Pone Fa’amausili.

Sinclair sympathised with Alaalatoa and said all teams were on notice regarding tackle heights.

“You’ve got to be disciplined,” Sinclair said. “Allan went for a good shot, he mistimed it and got the direction wrong and hit him in the head. As we know now, anywhere near the head, you’re gone. You’ve got to adjust your tackle height.”

The Waratahs returned to training on Thursday after a few days off. Despite the four-point loss, they are far more upbeat than when they were thumped by the Reds and Brumbies in the opening two rounds of the season.

“It’s the Waratahs, you expect the Waratahs to have results,” Porecki said. “They’ve got such a big name and brand behind them that there is just a massive expectation from the media and it’s fair because we haven’t started the season well.

“We didn’t get the result but I think from all aspects of the game we definitely improved and closed the gap considering the first two rounds were a bit of a blowout.”

The free-to-air exposure of Super Rugby AU has also placed greater spotlight on the Waratahs and other teams. It appears overseas companies are also taking a keen interest.

Interestingly, Jay Dhaliwal, the Canadian-based founder and CEO, said the free-to-air exposure of the competition had contributed to the company coming on board.

“There’s no doubt the Reds are on the rise and importantly now feature regularly on free-to-air television in Australia, which will allow us to introduce our brand and products to the Australian and Asia-Pacific market,” Dhaliwal said.