Power surging despite lack of outside buzz

Port Adelaide coach Ken Hinkley says it feels "almost like we have sat fifth" on the ladder all season, such has been the perception in the AFL world that the Power are a rung shy of the elite premiership favourites.

From the bookmakers to the casual pundits to the so-called experts, there hasn't been much love for the Power's prospects, particularly compared with the support for the claims of Richmond, Geelong, Brisbane and West Coast. 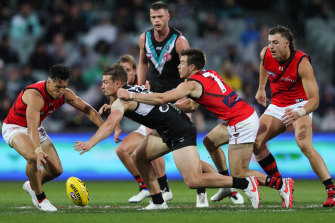 Port Adelaide’s Ollie Wines takes on Dylan Shiel and Zach Merrett during the win over the Bombers on Saturday.Credit:Getty Images

The facts are Port have been in top spot ever since round one and clinched a home qualifying final after belting Essendon by 50 points at rain-sodden Adelaide Oval on Saturday.

"The boys deserve it [home final], they've been there [first place] all year," Hinkley said. 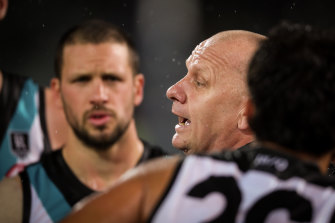 Bombers coach John Worsfold doesn't buy into the notion that Port are pretenders.

"They're not there because they're fluking it," he said. "Who comes up with this stuff? You sit on top of the ladder because you beat the opposition every week. The ladder tells the story of how good you are.''

While the Power soon will move into finals mode, Essendon's eyes are firmly on 2021, when Ben Rutten will take over from Worsfold, whose 369th and certainly final game as a senior coach will be against Melbourne next Saturday.

Worsfold expects his successor to be the beneficiary of fitter versions of Joe Daniher – should he re-sign – and Jake Stringer in 2021.

Daniher has been plagued by persistent groin problems in recent seasons, while Stringer missed seven weeks mid-season with a serious ankle injury. The out-of-sorts pair combined for 13 disposals and 0.2 against Port.

"We know he [Daniher] is going to start to work back to his best footy next year," Worsfold said. "This year was about just getting him back playing and he's had to do that without any match practice and without much training.

"Stringer is the same with the footy he's missed. We all had an eight-week lay-off and then Jake had a serious injury against Collingwood when he was close to best on the ground. With a good pre-season under his belt, Jake will be ready to play really good footy for us."