Just one week after celebrations for their drought-breaking premiership, Melbourne have pushed into the first round of this year’s national draft while grabbing St Kilda midfielder Luke Dunstan as a free agent on a two-year deal.

Melbourne secured a first-round draft pick in this year’s national draft after joining Adelaide, the Western Bulldogs and St Kilda in a four-way pick swap that will help the Bulldogs and the Saints gain points for father-son and academy bids and may give the Crows the collateral to land Sydney’s Jordan Dawson. 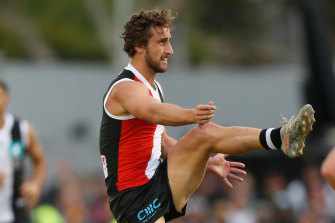 In the deal, the Demons gained picks 17, 37 and 49 in this year’s national draft while handing over a future first-round pick and picks 33 and 45 in the 2021 draft. The deal continues Melbourne’s practice of trading out future first-round picks for immediate ones, as they did when acquiring premiership players Clayton Oliver (2015), Kysaiah Pickett and Trent Rivers (2019), Jake Bowey (2020) and in trading for Jake Lever (2017).

The Demons have particular players in mind for pick 17, but believe there is next to no chance that their highly athletic key position NGA academy prospect Mac Andrew will be available at that selection because he will be picked in the top 10 and clubs can no longer match bids for academy players inside the draft’s top 20.

The recruitment of Dunstan, at no draft cost, provides another contested-ball winner to the AFL’s most potent midfield group.

In this four-way swap, the Bulldogs gave out picks 17 and 75 for picks 23, 44 and 45 to gain 499 more points to match a bid for father-son prospect Sam Darcy. The Bulldogs now hold 1524 draft points. This leaves them 490 points short of the 2014 points they require if the Giants bid for Darcy at pick two, as several industry sources are predicting.

But the Dogs are counting on gaining further picks when trading Patrick Lipinski to Collingwood and Lewis Young to Carlton.

The Saints’ part of the deal was based on their two NGA graduates, Marcus Windhager and Michito Owens, who may attract bids in the draft, so traded out pick 49 for picks 62 and 64 in this year’s draft as well as a future fourth-round pick. The club expects the acquired picks to hold a similar value to pick 49 on draft night after bidding takes place and picks dissolve.

Richmond and North Melbourne have not made progress in their negotiations over forward/ruck Callum Coleman-Jones, who wishes to join North on a four-year deal, with the Tigers wanting North’s pick 20 in return, but the Kangaroos refuse to part with a pick that early.

But neither North nor the player and his management want Coleman-Jones to walk via the pre-season draft for no return to Richmond and want a deal – the same position that Collingwood have adopted in discussions with the Western Bulldogs over Lipinski, who could also theoretically “walk” without a trade via the pre-season draft, if North do not want him.