Western Bulldogs 2016 premiership forward Tory Dickson, who kicked four and three goals respectively in the preliminary final and grand final of that year, has retired.

The 33-year-old told his teammates on Saturday of his decision to retire after 114 games. 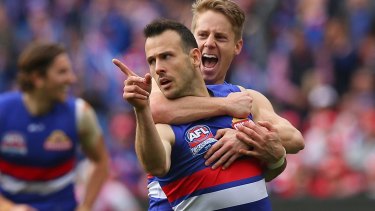 Dickson celebrates a goal in the 2016 grand final. Credit:Graham Denholm

"I'm incredibly proud of everything I have achieved as a Western Bulldogs player," Dickson said.

"For a long time, I didn't think I would get to play one AFL game and to have played more than 100 games for this club and contribute to our 2016 premiership success was incredible. The opportunity the Western Bulldogs have given me is something I will always be grateful for.

"Making the decision to retire has been incredibly difficult, but I believe it is the right one."

Dickson was a mature-aged recruit in 2011. Then 24, he was taken with pick No.57 of the draft. He had played VFL with Frankston and Bendigo.

He played 17 games in 2019 but due to injuries and competition for spots has only played once in 2020.

Bulldogs football director Chris Grant said Dickson had made a "significant" impact at the club over a decade.

"His story is one of real perseverance. Having been overlooked in multiple drafts, Tory continued to work hard and finally earned his opportunity on an AFL list," Grant said.

"On the field, his skills as a goalkicking forward have been clear for all to see, and his impact across our 2016 premiership year and successful finals campaign was profound. Equally important has been his off-field contribution, as a player his teammates love to play alongside, and in particular, as a great club person.

"Tory will forever be a Bulldog and we thank him for everything he has done for our club."

Dickson also played in the Western Bulldogs' 2014 VFL premiership side.