Rennie calls Cooper into Wallabies squad ahead of Bledisloe opener

Quade Cooper will make a shock appearance at Wallabies training on Monday morning and could hypothetically play in the first Bledisloe Test next month after answering a stunning SOS call from coach Dave Rennie.

James O’Connor’s groin injury will prevent the No.10 travelling to New Zealand and with border restrictions set to play havoc with the Wallabies’ upcoming Test campaign, Rennie has done the unthinkable by bringing back the 70-Test playmaker back into an Australian squad.

NSW-based No.10s Will Harrison and Ben Donaldson would not have been able to make it to New Zealand for next month’s first match against New Zealand.

Wallabies sources told the Herald that Cooper will travel with the team to New Zealand, likely to be on Friday, in a stunning return to the national set-up.

Rennie and Cooper organised a 90-minute meeting this week to discuss the prospect of returning in a training capacity, given the logistical headache of bringing players in from around the country.

The Wallabies coach wanted to get clarity around Cooper’s headspace and whether he was interested in coming back to mentor a young squad. 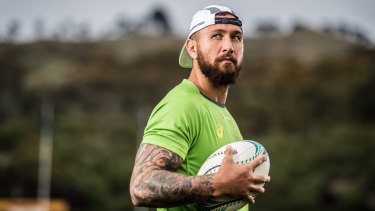 Quade Cooper will make a stunning return to the Wallabies fold.

While Cooper would be an outside chance to play for the Wallabies in the August 7 Bledisloe opener, given Noah Lolesio’s performances in the France series, the 33-year-old will be in the wider squad and could be parachuted in if an injury occurred.

It’s an extraordinary situation given Cooper is in Australia on a break from his duties in Japan and hasn’t played a Test since 2017.

Cooper is said to be extremely eager to train with the group given O’Connor’s injury. He arrived in Wallabies camp in Sunday evening, where he introduced himself to new squad members. 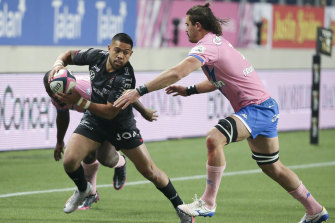 Duncan Paia’aua has been playing in Toulon since 2019.Credit:Getty

The COVID-induced uncertainty around borders and trans-Tasman travel was a strong theme in Rennie’s squad naming on Sunday, which saw uncapped Paia’aua become the first ‘Giteau Law’ pick of his tenure and Izack Rodda also recalled from exile.

The Wallabies have received a provisional green light to sidestep the New Zealand government’s closure of the Trans-Tasman bubble. Rennie told media on Sunday he understood there would not be a need for his Queensland-based squad to quarantine upon arrival, providing they continue to test every two days and register no positives.

The original Bledisloe Cup schedule had game one in Auckland on August 7, before games in Perth (August 21) and Wellington (August 28). But to minimise travel, Rennie revealed the new plan appears to be playing the second game in Wellington on August 14.

“Nothing is confirmed and there have been a lot of scenarios throw out,” Rennie said. “In the end we are prepared to play on the 7th and 14th in New Zealand and then go to Perth on the 21st, if that’s what’s deemed best. Our mindset is that to win the Bledisloe you have to win at least one of the two in New Zealand to give yourself a chance in Perth, so nothing changes really.” 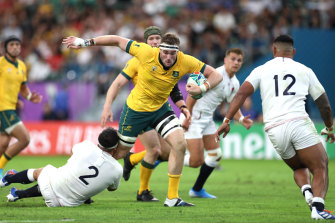 Pre-empting calls that all three games should just be played in New Zealand, Rennie rejected that argument and said travelling to COVID-free Perth should not cause issues for the Kiwis when returning home. The rest of the Rugby Championship schedule, which will see South Africa and Argentina playing games in Australia and New Zealand, remains up in the air.

With quarantine-free travel so difficult – from NSW and Victoria in particular – and planning for ‘worst case scenarios’, Rennie extended his squad to carry all he may need to both New Zealand and Perth, and had to turn the holidaying Paia’aua to provide depth in the backline.

The 26-year-old played for the Reds for five seasons – and once for the Wallabies against the Barbarians in 2017 – before moving to Toulon in 2019. Paia’aua was due to return to France in a few weeks for pre-season.

A skilful player who covers no.10, the midfield and even fullback, Rennie said he’d been trying to get Paia’aua to come back to Super Rugby and believed he was up to making a Test debut if called upon. Rennie utilised a new ‘Giteau law’ exemption of being able to pick two players from offshore under 60 caps, but it also represents the first time Rennie has called in an overseas-based player of any sort.

“We probably like his versatility to be honest. When you look at the squad we have a lot of specialist wingers and specialist midfield, there is not a lot of flexibility,” Rennie said.

“So someone like Reece Hodge plays multiple positions, we haven’t got an enormous amount of other guys. Someone like Jordy Petaia obviously can cover midfield and wing and potentially fullback. I guess based on needs, Duncan ticks a lot of boxes.”

Bolstering a largely unchanged squad that defeated France in the recent series, Rennie has called back Rodda for the first time since the 25-Test lock acrimoniously departed for France in June last year. Rodda has since returned to play for the Western Force.

Elsewhere, Brumbies rookie lock Nick Frost earned his first call-up to an Australian squad, and Canberra teammate Pete Samu has returned after injury. Force prop Tom Robertson has been called into his first Rennie squad but his WA teammate Sitaleki Timani has been omitted, along with Rebels back-rower Michael Wells.

Never miss a medal or great sporting moment with our Olympic update emailed daily. Sign up for our Sport newsletter here.