A relentless Max Gawn-led Melbourne have stormed into their first grand final in two decades after obliterating a bewildered Geelong.

A scintillating four-quarter effort, which included a four-goal third term by captain Gawn, broke the backs of an ageing Geelong and the Demons will start hot favourites in two weeks time against either Port Adelaide or the Western Bulldogs.

They could be without star defender Steven May, who will require scans on his right hamstring after injuring it midway through the first quarter. May came back on to the ground with a heavily strapped right thigh but was substituted out when the margin surpassed any chance of a Cats comeback.

But even a May-less Melbourne will be mighty tough to stop on grand final day if they play half as well as they did on Friday night.

The Demons were destructive with the football and desperate without it.

Many of Melbourne’s usual suspects did the damage. Christian Petracca, Clayton Oliver and Jack Viney were brutal in middle.

Patrick Dangerfield, Joel Selwood and Cameron Guthrie were powerless to the sheer strength of the Demons at centre bounces.

And while many may have predicted that Gawn could have been best on ground against Rhys Stanley, few would’ve correctly guessed how.

The bearded Giant – who kicked a glorious snap goal in the second quarter – drifted forward in the third term and took over.

Two of the goals were less glamorous set shots, but the other two will live in the memory of Melbourne supporters for decades to come. 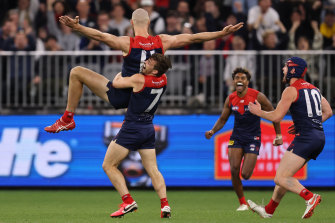 One – a shot on the run from outside 50 after receiving a handball – was something to be expected from Petracca or Dangerfield. Not of a 208cm ruckman.

The other – a snap over his left shoulder as he was falling backwards – would have been something practiced by the acrobatically gifted Kozzie Pickett.

As Melbourne’s lead surpassed 80 points, a Demons-driven Mexican wave flowed around the ground late in the last quarter. It may as well have been called the Max-y-Gawn wave.

Earlier, the Demons had started like a house on fire and yet somehow led by less than five goals at half-time.

Although Jeremy Cameron kicked the first goal of the match after Melbourne butchered early opportunities, that would be the only action Cats fans would see for the opening stanza.

The Demons responded with five unanswered goals and they came from a variety of avenues.

Ben Brown was an important focal point up forward. Tom McDonald was roaming ominously around the half forward line. Petracca remained an ever present threat. Pickett and Charlie Spargo were causing headaches on the ground.

But when Petracca banged through his first from the top of the goal square to give the Demons a three goal buffer, a bigger story was unfolding at the other end of the ground.

May was limping down the players race towards the rooms looking very emotional. He was clutching his right hamstring. Seconds earlier, May had been nudged under the ball by his direct opponent Tom Hawkins. Hawkins marked and boos echoed around Optus Stadium from incensed Melbourne fans who thought May had been pushed.

It was a double blow for the Demons. The free kick was missed and May immediately felt for his hamstring.

As the potential heartbreak story of May – who was playing in just his second final in 170 games – filtered around the ground, replays at the stadium showed Jake Lever limping in his defensive 50 after Esava Ratugolea dived across his body in a desperate attempt to smother.

Surely both May and Lever couldn’t have injured themselves in the space of 60 seconds?

To the relief of the Demons faithful, Lever didn’t need to come off the ground. In the meantime, substitute James Jordon was warming up on the boundary line for the absent May, who hadn’t returned from the rooms.

But he did after quarter time. Incredibly, May – with a heavily strapped right thigh – took his place in the game at the start of the second quarter standing alongside Hawkins, as he did in the first.

And the onslaught continued. Five unanswered goals in the first quarter was reduced to four in the second and with five minutes left in the half the game looked all but over.

But two scratchy goals from Hawkins and Isaac Smith somehow reduced the margin to 29 points. The Demons had played the half of their lives. It felt like they were leading by 10 goals but, actually, it was less than half of that.

It wouldn’t matter. The Demons kept asking the questions and Geelong ran out of answers.

If the romance of the night was Gawn and the news was May, the heartbreak story was Nathan Jones.

The sight of the club legend sitting in the back of the players box would have been the only thing to wipe the smile off the faces of jubilant Melbourne supporters.

Jones deserves a grand final appearance more than any other Demon on the list. Footy can be – as the Demons were all night – brutal.