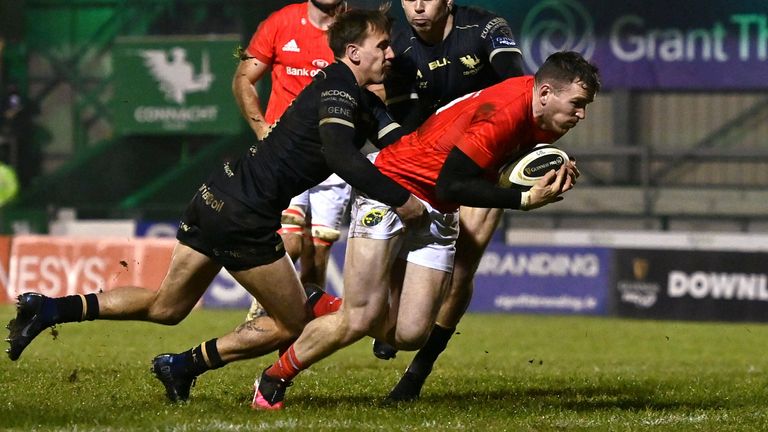 Sky Sports Rugby Union rounds up Saturday’s four matches in the PRO14 as Zebre won the Italian derby, Ospreys and Cardiff Blues were victorious in Wales, and Munster saw off Connacht…

Antonio Rizzi’s two penalties in the last eight minutes helped Zebre to victory over Benetton, whose second-half fightback at the Stadio Sergio Lanfranchi was in vain in the Italian derby.

Benetton led 6-3, thanks to Paolo Garbisi’s two penalties, but were unable to exact revenge for their 24-15 defeat to the same opponents a week ago.

Michelangelo Biondelli crossed the whitewash shortly before the interval to put Zebre out in front and though the conversion was missed, Carlo Canna’s second penalty of the game plus Maxime Mbanda’s 52nd-minute try gave the hosts a 16-6 lead.

Benetton roared back just after the hour mark to set up a thrilling finale. Gianmarco Lucchesi and Michele Lamaro touched down within three minutes of each other and Garbisi’s conversion of the latter effort meant Benetton held an 18-16 lead with a quarter of an hour to go.

But former Benetton fly-half Rizzi held his nerve to split the posts to hand Zebre the slimmest of advantages before giving them some breathing room, and ultimately ensuring victory, by booting another penalty three minutes from time.

Stephen Myler kicked 13 points as Ospreys edged out Welsh rivals Dragons with a hard-fought victory on a freezing evening in Newport.

Myler and Josh Lewis exchanged penalties early on, but the visitors were temporarily reduced to 14 men when Luke Morgan deliberately knocked on and the Dragons took full advantage through a converted try from Jared Rosser.

But before Morgan returned to the fray, the Ospreys were back on level terms as man of the match Mat Protheroe went over for a try in the corner which Myler converted.

The fly-half kicked his side into a 13-10 lead at the break, with Lewis pulling the Dragons level again on the hour mark.

Ospreys hit the front again when George North went over for a try, only for Jamie Roberts to hit back for the Dragons and set up a tense finale.

However, Myler’s third penalty of the match and a late try from Scott Otten clinched the Ospreys’ fifth win of the PRO14 campaign.

Liam Williams was sent off in the 37th minute to ruin Scarlets’ chances of a hat-trick of Welsh derby wins, as Cardiff ran out victors.

The Wales international rushed headlong into a ruck and clashed heads with prone Blues flanker Shane Lewis-Hughes and, after TMO replays, the wing was ordered off.

At that stage Blues were already in control of the match, with an inspirational performance from outside half Jarrod Evans ensuring that his side put a difficult period behind them, with poor results culminating in the departure of head coach John Mulvihill earlier in the week and Dai Young appointed interim director of rugby.

A lovely evening at the Cardiff City Stadium. Thank you @CardiffCityFC for your hospitality. Diolch. pic.twitter.com/I2pJprFKxk

The Blues’ tries came from Willis Halaholo, Tomos Williams and Rey Lee-Lo, with Evans adding four penalties and a conversion.

Thirteen-man Munster survived a frantic finish in the top-of-the-table clash to emerge as breathless winners over Connacht at the Sportsground.

A last-gasp match-winning try eluded the home side, who came right back into contention late on through Peter Sullivan’s 78th-minute try and sin-bins for Munster replacement backs Rory Scannell and Nick McCarthy.

Munster had scored 10 points during Shane Delahunt’s sin-bin period, including an 18th-minute try from Chris Farrell, to lead by seven at half-time. Jack Carty replied with a late penalty for Connacht.

Munster’s control of the breakdown was decisive – where player-of-the-match Tadhg Beirne starred – and two second-half penalties from JJ Hanrahan, who finished with 11 points, had them marked out as comfortable winners until the late scare.

The result puts Johann Van Graan’s men 11 points clear at the top of Conference B, while second-placed Connacht, who were unable to repeat last week’s heroics from the Leinster game, have Scarlets and Cardiff snapping at their heels.