Stadium openings, Suaalii and selfies all part of Will Penisini’s rise

The honour of being the Eels representative chosen to officially open Bankwest Stadium could have gone to any of the club’s big names.

Mitchell Moses, Clint Gutherson, Dylan Brown and Junior Paulo were just some of the marquee men considered for a historic photo opportunity alongside NSW Premier Gladys Berejiklian for the traditional cutting of the ribbon.

Instead, the privilege of opening the $300 million venue was bestowed upon a 16-year-old from Sydney’s western suburbs who even diehard Parramatta supporters had never heard of.

“I think I was still only 16, nobody knew who I was,” said Will Penisini.

“I was just a junior representative and, to be honest, I was pretty scared. I didn’t know what I was doing.

“They didn’t give me too much info, they just said I was attending to help cut the ribbon. 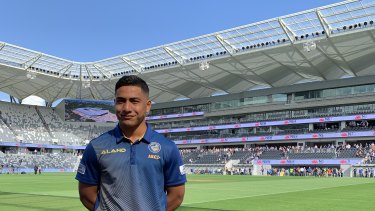 Parramatta Eels rookie Will Penisini was given the honour of helping to officially launch Bankwest Stadium.

“It was pretty daunting, but looking back it was a great experience.

“Gladys cut the ribbon there, it was special. To be honest, I wasn’t really expecting it, but it was special to see Bankwest first hand, before the other guys. 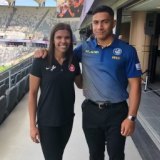 “I got a tour, was able to walk onto the field and do a bit of media. It was a great experience for me.”

The Eels and Western Sydney Wanderers were each tasked with picking a player of the future, a rising junior star they believed would grace Bankwest Stadium for many years to come. The Wanderers opted for promising goalkeeper Jada Mathyssen-Whyman, who has gone on to star for Sydney FC in the W-League and become a Young Matildas representative.

“I didn’t think much of it at the time, but looking back it’s a special moment to open a stadium like Bankwest,” Penisini said. “It’s our home now for the Eels. I’m honoured to be a part of that moment.”

Penisini, whose fourth NRL appearance will be in Sunday’s sudden-death finals clash with Newcastle, hasn’t yet played on Bankwest due to the team’s relocation to Queensland. However, the 19-year-old centre is tipped to be a mainstay of the Parramatta squad for the next decade.

Eels coach Brad Arthur has worked with him from under-12s level, where they combined for the Rouse Hill Rhinos. The young centre’s talent was quickly evident, which is why the prestigious King’s School in North Parramatta offered him a rugby scholarship at the end of year seven. It was an opportunity he was keen to make the most of, but the transition was initially difficult. 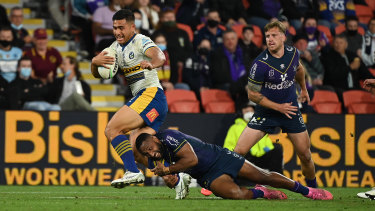 Will Penisini breaks a tackle against the Storm last month.Credit:NRL Photos

“I kind of felt lonely, I didn’t know anyone there,” Penisini said. “So I wanted a mate to come as well.”

His mate was also turning heads with his freakish footy feats. The pair first met while playing league for Sydney West at under 11s level, quickly became best mates and were keen to continue playing and even schooling together. 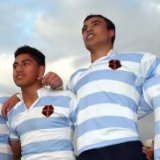 The friend, despite being a year younger, ended up being a pretty big deal, to the point where he even beat Penisini to an NRL debut. His name is Joseph Suaalii.

“He got me into King’s actually,” Suaalii told the Herald. “He recommended my name and was the one who got him in.

“We grew up with each other and have been best mates since the age of about 10 or 11. He’s always had that desire and drive to become an NRL player, he always loved the game. It’s good seeing him do what he does.”

With future Rooster Suaalii at inside centre and Penisini at outside centre, King’s rarely tasted defeat on the rugby field. Much has been written about Suaalii’s formative footy years, but it soon became evident that Penisini was a very special prospect as well.

The school’s coaches broke protocol by selecting Penisini on a rugby tour to Europe when he was still in year nine, a privilege usually afforded to students going into year 11 or 12. Marking up against some of the best 18-year-old European footballers, the youngster dominated.

“There was a tour to France and parts of England as well, I had to be granted permission to go,” Penisini recalled.

“That was special for me, an experience I’ll never forget. It was my first big tour, it was three-and-a-half weeks overseas basically with the year 12s or those going on to be year 12s.

“That was a big stepping stone in my King’s career, it’s an experience I’ll never forget.”

As they rose through the ranks, Penisini and Suaalii remain the closest of mates. 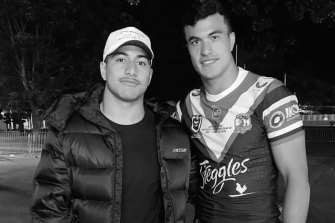 Will Penisini and Joseph Suaalii have been best mates for almost a decade.

“I always go to his house, we’re pretty close. We’ve been overseas together and done a lot of stuff.

“I’ve always seen him as one day playing in the NRL ever since we were young. We always wanted that and he had that drive in him. I knew one day he would play NRL. I didn’t know it would come this quick, but he’s killing it, which is good. 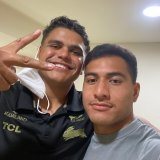 Will Penisini didn’t miss the chance to take a selfie with Latrell Mitchell.

“He’s a goal setter and always trying to achieve them. It’s good he’s achieved his goal of playing NRL this year and he has got another one, playing finals footy, too.”

Suaalii’s season-ending injury has prevented the pair from facing off in the NRL this year. However, the one time they battled on the footy field, in a Harold Matthews clash when Suaalii was still at South Sydney, Penisini took the bragging rights.

“We definitely went after each other that game,” said Penisini, who took the opportunity to grab a selfie with one of his idols, Latrell Mitchell, when the teams were part of the same biosecurity bubble.

“There’s a funny photo of us, him over the ball and us getting into each other.

“We always talked about it, it was a dream for us to play NRL and then verse each other.

“We know if we get the chance to go against each other, we will definitely go after each other.”

The first challenge, however, is a clash with another young gun, Knights star Bradman Best. Penisini and Best were roommates for NSW at under-18s State of Origin level.

“It will be a good match-up to go against him, he’s a great player,” said Penisini, whose 16-year-old brother is also a promising prospect in the Eels system. “It will be fun.”