Battlelines are being drawn in the fight for the Collingwood presidency with revered former Magpie Dane Swan throwing his support behind the current board led by Mark Korda, saying that any contest for board positions should occur at an annual general meeting rather than mid-season.

The 37-year-old – who retired after being injured in the opening match of 2016 with a premiership, a Brownlow Medal and three club best and fairests, including one in the 2010 premiership year in his decorated career – said on his weekly podcast Humpday with Swanny & Friends that a stoush would harm many who put the club’s interests first. 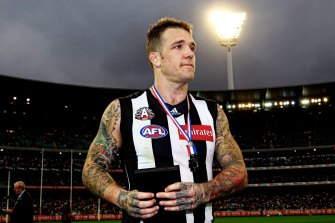 He said he was prepared to state his case once he heard former president Eddie McGuire declare that he was not involved in Browne’s push for the presidency with McGuire telling Footy Classified on Wednesday night he was sick of being called a liar and it broke his heart that a contest for his former position loomed.

“Whoever was going to take over from Ed was f—-d … they need some clean air,” Swan said.

Premiership captain Tony Shaw has not endorsed either party but has made it clear he hopes an EGM can be avoided.

Swan said he had he had no doubt change was needed in the football department after Collingwood’s horrendous 2-9 start to the season, saying it was clear the players needed to be allowed to play with more freedom.

He said playing such a defensive style did not help young players develop.

“Give the players some freedom to actually play a style they enjoy,” Swan said. “As a supporter wouldn’t you rather people trying to take the game on and go down by eight goals than make it a two-goal-to-one game.”