Melbourne Storm have lost another star with lock Dale Finucane to miss the rest of the regular season.

The New South Wales State of Origin forward was set to play his 200th NRL game in Thursday night's clash with third-placed Parramatta Eels but he tore his calf muscle at training on Monday.

Scans confirmed it was a significant tear and he will miss at least six weeks, so with six games to go it's unlikely he is back until the first week of the finals. 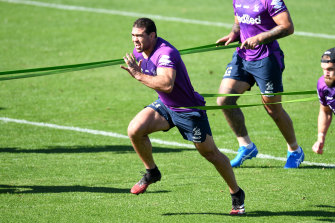 The Storm already have star playmakers Cameron Smith (knee) and Cameron Munster (knee) out with injuries along with Fijian forward Tui Kamikamica, who is recovering from back surgery.

Half-back Jahrome Hughes (groin), forward Brandon Smith (ankle sprain) and winger Suliasi Vunivalu (broken jaw) were all hurt during last Thursday's 24-6 win over Sydney Roosters so they could field a highly depleted side against the Eels.

It's unclear if any of those players will be available for selection this week for the Storm, who have won eight straight games and sit three wins clear in the top four.

The Storm are also challenging a dangerous contact charge against vice-captain Jesse Bromwich with the case to be heard on Tuesday night. If he loses, he will also miss Thursday's game.

Young playmaker Cooper Johns, son of Matthew Johns, could be in line to make his debut should Hughes have to miss Thursday's game.

Storm coach Craig Bellamy will have a difficult time filling roles when teams are named on Tuesday with so much of his first-choice side out but the team does have a number of reserves, who are used to playing out of position.

Bellamy did raise concerns about the number of injuries and the growing fatigue among players this season as teams are in the midst of playing 18 weeks straight following the COVID-19 break earlier in the season.

He added that new rules that make the game faster and enhance player fatigue could also be leading to injuries as a number of clubs face growing casualty lists.

"I'm not sure if there is too much fatigue as we have teams with a lot of injuries," Bellamy said.

"It's not just about fatigue and soft tissue injuries. When people get fatigued, they start putting their bodies in the wrong place and that's where you get injured from."

The Storm play Parramatta Eels at Bankwest Stadium on Thursday at 7.50pm.