Storm, Sea Eagles excel at playing the long game but who will go the distance?

There’s a tingly, expectant feeling about the first game of the NRL play-offs, like the “set” call at the start of the 100-metre Olympic final, or a boxer bouncing on his feet before the opening bell, or the anticipation of ordering that first schooner when this torturous lockdown ends and the pubs open.

Friday night’s Storm versus Sea Eagles match is an “anything could happen game”, unlike the other three contests where injury, suspension and predictability of play mean there won’t be too many surprises.

Souths Wayne Bennett can play ducks and drakes over who will be his starting fullback to replace Latrell Mitchell in Saturday’s match against Penrith but the coaches could email their game plans to each other and not be shocked.

Judging by the scrum-based moves Penrith’s Ivan Cleary revealed last week, it’s almost as if he is daring the Skinny coach to stop a left-side try, saying, “I know that you know but no, you’re not”.

Friday’s match between the Storm and Sea Eagles throws up intriguing possibilities, mainly because it boasts two of the code’s best fullbacks: Ryan Papenhuyzen and Tom Trbojevic.

Both are capable of long-range tries. The NRL statistics show 18 per cent of their clubs’ tries this year have been scored from their own half (Storm 23 tries, Manly 21). 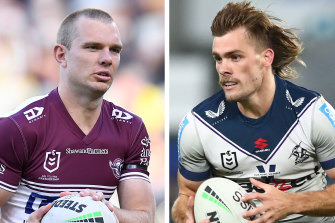 Friday’s match between the Storm and Sea Eagles boasts two of the code’s best fullbacks: Tom Trbojevic and Ryan Papenhuyzen.Credit:Getty

That’s a big difference compared to the Rabbitohs, who have scored only 3 per cent of their tries (4), and the Panthers 7 per cent (7) from their end of the field.

Manly’s final try of the regular season, beginning inside their goal line, showed how they can attack long range.

NRL analysts have tracked the tackle and start of these missiles. Half of the Storm’s tries launched from their half come on the fourth tackle, while Manly and “Turbo Tom” are more likely to strike early in the set.

The Storm use a play-the-ball in the middle of the field to attack either side of the ruck from their own half, while Manly generally look for a play-the-ball on the right side to launch a big shift to the left.

There has been a slight increase in the number of “tackle one” play-the-balls beginning in the opposition half this season (71 per cent in 2019 to 73 per cent in 2021), as a result of the referee awarding the attacking team a repeat set rather than a penalty.

Clubs with instinctive halves and hookers, and quick fullbacks, can take advantage of this, hence the number of long-range tries has increased across the NRL from 8 per cent in 2019 to 11 per cent this season.

The Storm and Manly account for most of this increase. The Roosters scored the most long-range tries in 2019-20, with 13 per cent. Now, it’s only 8 per cent. It’s not so much due to fullback James Tedesco tiring but the absence of the quick-thinking Cooper Cronk, Luke Keary and Mitchell.

Insofar as the Roosters won the 2019 premiership, while six-again calls against them cruelled their 2020 chances, maybe it’s an omen for the teams with long-range missiles.

The winning try in the 2020 decider came when Papenhuyzen sped onto a pass from a ruck in his team’s half.

Coaches forever talk about “completion rates” rather than field position. If “possession is nine-tenths of the law”, the six-again rule has pushed it towards 100 per cent.

Like governments in this COVID-19 age, the NRL embraced rules on the run, but six-again calls have been wound back before the semis.

The average of the last three rounds is 3.4 six-again calls a game, compared to 5.2 for the season.

It’s as if the referees have been told, “Don’t blow ‘six again’ unless the infringement is equal in gravity to what you would normally blow a penalty”.

It won’t make much difference to the Storm who receive the lowest number of six-again calls in the NRL anyway but it adds to the intrigue of the semis.

Penrith will have a say in whether the Storm and Sea Eagles meet again in the decider but, irrespective, the tingles will continue and the pub schooners must wait.