Third time’s a charm for the Brisbane Lions. After two grand final losses they are finally AFLW premiers after an 18-point triumph in the decider.

After being denied a crowned premier last season, footy fans across the country were delighted to see the grand final being played in front of more than 22,000 spectators at Adelaide Oval. And it was no surprise that fans in the footy-mad city of Adelaide flocked to the iconic venue to see the two powerhouses of the competition battle it out in what was each club’s third grand final appearance.

Following her dominant performance in the preliminary final, Adelaide’s Ebony Marinoff was greeted with a Cathy Svarc tag to start the game. Svarc has had the job on some of the biggest names of the competition and is fast becoming the best tagger in the game, while still having an offensive presence. 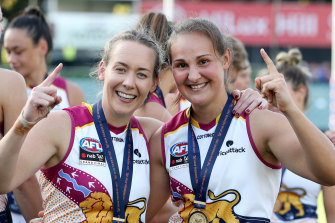 Lauren Arnell and Breanna Koenen of the Lions.Credit:Getty Images

As expected, the contest was ferocious. Brisbane’s pressure was evident, which allowed them to slow Adelaide’s slick ball movement. The first quarter was played with immense heat, which produced many turnovers. Both teams were looking to play an exciting brand of footy, moving the ball forward by foot; however, it was the defences of the two sides that were stopping any flow of scoring.

The up-and-coming star Courtney Hodder got the Lions off to the perfect start with a quick snap at goal, a result of the forward pressure applied by Brisbane’s forwards. Stevie-Lee Thompson was the only other goal scorer during that term, for Adelaide, with a lovely run-and-carry goal late in the quarter.

The second quarter was played in similar fashion. This time it was Danielle Ponter showing her class in front of goals, kicking a set shot to put the Crows in front early. It was yet again a moment of brilliance by Hodder, soccering a goal from a near-impossible angle that sparked the Lions.

A dominant third quarter from Brisbane set up the win. Their identity was on full display. High pressure around the ball and their defenders in Kate Lutkins, Breanna Koenen, Shannon Campbell and Natalie Grider were like a brick wall. Despite Adelaide having close to double the inside 50s, they struggled to apply scoreboard pressure, which allowed Brisbane to counterattack courtesy of a great goal from Jess Wuetschner.

It was the late flurry of goals that put the Lions in a commanding position going into the final quarter, with Belle Dawes kicking a goal on the three-quarter-time siren.

Despite all the dominance in the forward half of the ground, Adelaide couldn’t penetrate the defence and the Lions had done enough in the third quarter to secure victory.

To win their first AFLW premiership under such adversity highlights what a class outfit the Lions are. They were one of a few clubs that had to play a lot of games on the road, and since the start of AFLW they have lost 16 players to expansion. Their ability to find new talent and get them to buy into the Lions’ team style of footy is a credit to their coaching staff and leaders.

The Lions’ triumph was also a fitting end to the careers of two of the greats of our game: Lauren Arnell and Emma Zielke, who have played since the inception of the league and also have had such a big impact on women’s footy before AFLW was even a thought. It was a beautiful moment for Arnell when she kicked a key goal in the third quarter, and she finishes her illustrious career in style. The Lions have set the new standard in AFLW this season and shouldn’t go into 2022 underrated. I can’t wait for it to go to another level next year.