Tigers providing ‘behind the scenes support’ to imprisoned Stack

The manager of imprisoned Richmond player Sydney Stack says the Tigers have been privately supporting the troubled West Australian defender as he faces the prospect of seeing in the new year behind bars.

Stack, 20, is serving a 14-day quarantine period in an isolation cell at Perth's Hakea Prison over an alleged quarantine breach. 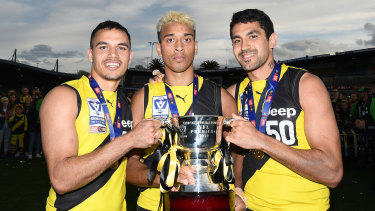 His agent, former West Coast and Brisbane Bears player Paul Peos, said the Tigers had been supportive of Stack despite the player himself acknowledging that his career hung in the balance.

"Can't say much at this point, but I can say Richmond have been providing considerable behind the scenes support for Syd's welfare," Peos said on Tuesday.

The breach came about after Stack returned to WA earlier this month to attend his grandfather's funeral, having started pre-season training with the Tigers at Punt Road earlier in December.

A brief lay-over at Adelaide airport en route to Perth triggered a 14-day quarantine period in the WA country town of Northam. Police allege Stack breached the conditions of his quarantine by staying in the Perth suburb of Belmont. The alleged breach was picked up in the early hours of Saturday morning when police stopped Stack following an alleged brawl in the Perth nightclub district of Northbridge.

The Tigers have opted against making more than a brief generic statement while the matter remains in front of the courts.

Stack had already found himself in hot water earlier in the year when he and Richmond teammate Callum Coleman-Jones were sent home from Queensland, suspended for 10 games and fined following their involvement in a fight outside a Gold Coast strip club in what was a serious breach of AFL hub protocols.

Stack acknowledged to a court on Sunday via an audio hook-up that “my AFL career is on the line with Richmond”.

A Perth magistrate has adjourned the matter until January 6 as the prison's quarantine policy prohibits Stack from leaving his cell to speak to the court via a video link during his isolation period.

Peos on Monday said that his client sounded “very distressed”.

Former St Kilda assistant coach Jason Mifsud, who like Stack is Indigenous, questioned the decision to put Stack behind bars.

"Challenge the behaviour, support the person. Not sure incarcerating a vulnerable young person is the only solution in a case such as this. Seems unimaginative and unnecessarily punitive," Mifsud wrote on Twitter.

Despite being rated by some clubs as worthy of a first-round selection on talent alone, Stack was overlooked in the 2018 draft amid concerns about his reliability. He became one of the first players to be signed by the pre-season supplemental selection period after training with Richmond following the draft.

Stack worked his way into the Tigers' senior side in 2019 before being hampered by injury and ultimately missing selection for the AFL grand final. He did however win a premiership with Richmond's VFL side.