Joey Manu says he eventually wants to make the switch to fullback after admitting he was aware of talk linking him to the New Zealand Warriors.

The Warriors farewell Roger Tuivasa-Sheck at the end of the year, and Manu, a Kiwi, has more than impressed in the custodian role for the Sydney Roosters whenever James Tedesco has been sidelined. 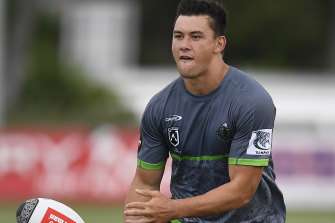 Joey Manu at Maori All Stars training during the week.Credit:Getty Images

Manu is not expected to spend time at fullback for the Maori All Stars, but told the Herald he was keen to make the switch in club land.

The issue for Manu remains the fact he is contracted to the Roosters until the end of next year and will not be free to negotiate with rivals until November.

If Joseph Suaalii lives up to the hype in the outside-backs, the Warriors might have a chance of landing their man early.

“The games I’ve played at fullback, I’ve really enjoyed,” Manu said. “It’s a tough position but it’s exciting for me and I can get my hands on the ball more and be around the ball. Obviously you have to be a lot fitter for that position. 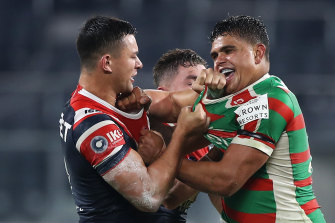 “If it’s soon or in the future, I think fullback would be a position I’d like to take on. But this year and next year I’m at the Roosters and I’ll definitely be playing centre with ‘Teddy’ [Tedesco] there.

“If a club approaches me once I’m off contract, I’d look at it, definitely.

“I’ve heard a bit around [the Warriors’ interest], but I can’t meet with them or negotiate with them. I guess I’ll see how I go this year and see what happens. I have seen there’s been a bit of talk there. Roger is a big loss for the Warriors.”

Manu won over the Auckland faithful at the end of 2018 when the Kiwis upset the Kangaroos and he got the better of then-teammate Latrell Mitchell. Mitchell said Manu would go on to become the best centre in the game.

The presence of Charnze Nicoll-Klokstad and Dallin Watene-Zelezniak means there will be no need for the Maoris to lean on Manu at the back against the Indigenous All Stars.

Manu, like the other young Maori players, idolised 35-year-old Benji Marshall growing up.

Marshall has added plenty of energy at training and his experience will be priceless in the heat of battle.

“He was from NZ, and the things he did on the field hadn’t been done at the time, including all the side-stepping and flick passes and long passes,” Manu said.

“Growing up, we’d always play touch in the backyard and practise Benji’s moves. He did something cool and you’d then try in the yard or at school the next day. Most of the boys looked up to him as a kid. It’s cool to have him here.”

Manu, who grew up in the tiny north island town of Tokoroa, dreamt of representing the All Blacks as a kid, a move now being pursued by Tuivasa-Sheck, whom he could potentially replace at the Warriors.