Wests Tigers outside back Asu Kepaoa has suffered a major setback in his return from an ACL injury, tearing his pectoral muscle at training this week.

The 21-year-old, who had been training in the centres over the preseason and was firming to start round one after impressing in his transition from the wing, is now expected to miss up to the first 12 rounds of the year.

Kepaoa underwent surgery this week, with the specialists conceding that the best outcome would be a three-month recovery (round eight). The Tigers have been told that could extend to four months depending on his rehabilitation from what is believed to be a partial tear.

The Tigers will already be without centre options Adam Doueihi and Tommy Talau to start the season, with both players coming off ACL injuries of their own.

The Tigers, however, have added some depth in the outside backs over the past couple months by luring Newcastle's Starford Toa and Junior Wallabies player Junior Tupou to the club.

Coach Michael Maguire has also added English centre Oliver Gildart to his roster, while he could also use fellow recruit Tyrone Peachey in the centres. 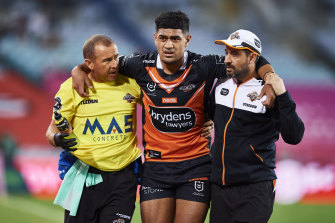 Asu Kepaoa’s 2021 season ends prematurely in round six after tearing his ACL.Credit:Getty

Kepaoa was brought to the club mid-way through the 2020 season from the Sydney Roosters, released by the Tri Colours in a move that allowed cross-code international Sonny Bill Williams to finish his career under Trent Robinson.

Kepaoa has scored 4 tries in 10 appearances for the joint venture club. He hasn't played in the NRL since rupturing his ACL in the second half of the club's heart-breaking loss to the South Sydney Rabbitohs in round six.

Meanwhile, the NRL held its first meeting with club bosses on Friday morning, organising a two-hour phone hook up with the chief executives to discuss the major issues ahead of the 2022 season.

Clubs were informed they did not need approval from the salary cap auditors to bring players from outside the top 30 if they had players unavailable due to COVID.

They were also told that players selected to participate in next month's All Stars match at CommBank Stadium would be required to remain in team bubbles while in their respective Indigenous or Maori camps.

NRL biosecurity expert Dr Heslop told clubs that expected the current wave of COVID infections was expected to decrease significantly in February and was hopeful it wouldn't have too big of an impact on the season when it kicks off on March 10.