Umpire treatment was in spotlight before Greene incident

Toby Greene’s run-in with umpire Matt Stevic came just three days after concerns about player behaviour towards umpires were discussed at a meeting involving many of football’s heavy hitters.

Well-placed sources have confirmed to The Age that the AFL’s competition committee – which features a host of club and industry leaders including Greene’s Greater Western Sydney captain Stephen Coniglio – spoke about a perceived trend of dissent towards on-field officials which some members of the committee agreed were trickling down to community football.

While the matter was only one of many issues discussed at the meeting last Wednesday, sources indicated there was a broad agreement from those on last week’s call that behaviour towards umpires was an important area and that a watching brief would need to be kept about arguably slipping standards from players.

At the heart of the discussion was the fear of a copycat effect at grassroots level, where players could replicate witnessed in the elite competition. The AFL is mindful of the challenges in recruiting and retaining umpires in suburban and country leagues.

While the AFL tribunal is an independent body and not beholden to any messaging from a body like the competition committee, last week’s discussion shows that Greene’s tribunal hearing this week will be held against a backdrop of league and industry sensitivity towards the treatment of umpires.

Formed in 2018, the committee is designed to include key stakeholders in shaping AFL decision-making.

As well as Coniglio, the committee also includes Geelong star Patrick Dangerfield and Carlton gun Jacob Weitering as well as several senior coaches, directors and executives from around the league. Several AFL executives and commissioner Simone Wilkie are also part of the committee, which had also included Eddie McGuire until his resignation as Collingwood president.

Greene was on Sunday sent directly to the tribunal by match review officer Michael Christian after the Giants forward was assessed as having made intentional conduct with veteran field umpire Stevic at three-quarter time of GWS’s win over Sydney in Saturday’s elimination final thriller in Launceston.

Greene – one of the most frequent visitors to the AFL tribunal this century – stands to miss Friday night’s semi-final against Geelong, and possibly even more games, should he be found guilty.

Should the Giants beat the Cats, they would play Melbourne the following weekend in a preliminary final.

Speaking on KIIS radio on Monday morning, Demons jet Christian Petracca said that if it were up to him, Greene would be free to play this week.

“It is a bad look, but it’s a big name and they need Toby Greene,” Petracca said.

“If I was judging this I would give him a harsh fine. You need big names in finals.

“They say there’s no special treatment. Greene has been under the spotlight a few times. If that was someone else, would they get off?” 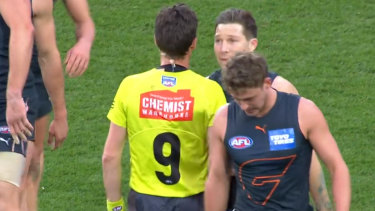 However, 1999 Brownlow medallist Shane Crawford told Channel Nine’s Today that Greene was staring at a suspension.

“I think he’s in big trouble, he will be suspended for a couple of weeks at least,” Crawford said.

“We would love the AFL to jump in and say, ‘listen we will just give you a fine and a little whack over the knuckles’ because the Giants would love him to play. He’s such a wonderful player.

“But it’s not a good look. We have to protect our umpires and look after them, they do a wonderful job.”