Wales are missing TWENTY-ONE players for their Six Nations clash

Wales are missing TWENTY-ONE players for their Six Nations clash with Scotland this weekend as injury rules out George North, Josh Navidi, Josh MacLeod and more from Wayne Pivac’s squad

Two letters dropped from the name of Wales’ training centre this week as they prepare for Scotland – less The Vale, more A&E with nine players now out.

As Sportsmail reported yesterday George North will wait for his 100th cap – he is over his eye issue, but scans revealed a foot problem which has ruled him out.

And he is joined on the sidelines as a fresh absentee by Josh Navidi, who picked up a neck problem, and most brutally of all Josh MacLeod. 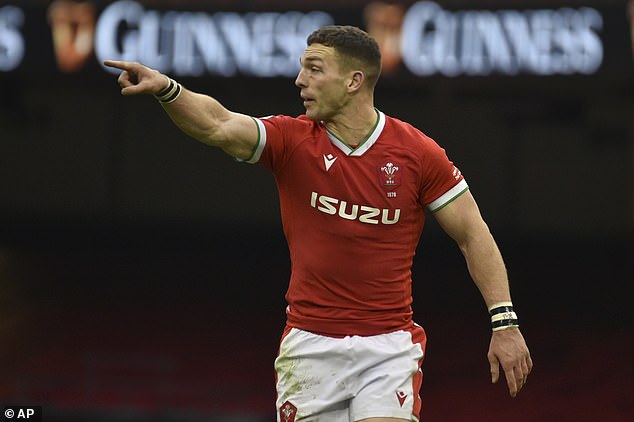 The 24-year-old Scarlets flanker was told in front of the team that he would start at blind-side flanker in Edinburgh, only to rupture his Achilles tendon half an hour later.

‘It’s really sad and disappointing for Josh,’ said Pivac who revealed the uncapped youngster would now face six months out.

‘A debut against Scotland will have been something he’s dreamed off, so we’re very disappointed for him.

‘There has been a lot of time spent in the medical room, I’ve got to tell you.’

Dan Lydiate (knee) and Tomos Williams (hamstring) will not be fit for the England match, but North, Jonathan Davies (ankle), Hallam Amos, Johnny Williams (both concussion), Josh Adams (banned) and Navidi should be.

So while Pivac has been tearing his hair out – ‘what’s left of it!’ he joked – at that groaning list he has brought Gareth Davies and Liam Williams back in and has World Cup starter Aaron Wainwright on the flank, therefore does not view the current situation as an insurmountable crisis.

‘You’ve just got to box on, you can’t dwell on it,’ he added – now with 21 players he has tried to pick during his first year in charge out injured.

‘Our glass is half full. It’s really just the midfield and the jackal threats we were looking to put into the game. We don’t have as many now.

‘To have someone like Liam Williams, a British Lion, coming in is very good.

‘The guys know they’re going to have a tough day at the office regardless of these injuries. It’s not all doom and gloom.’ 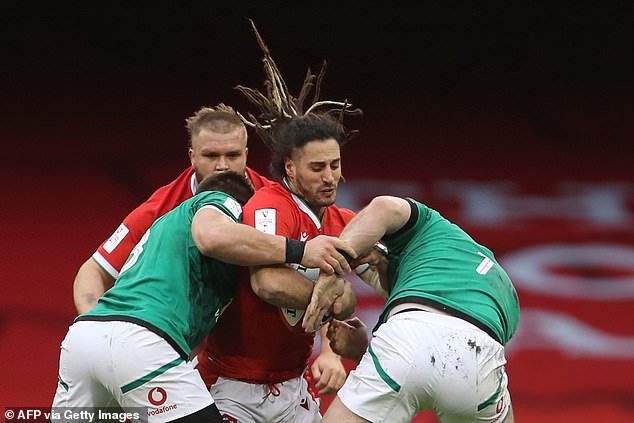 He is joined on the sidelines as a fresh absentee by Josh Navidi, who picked up a neck problem 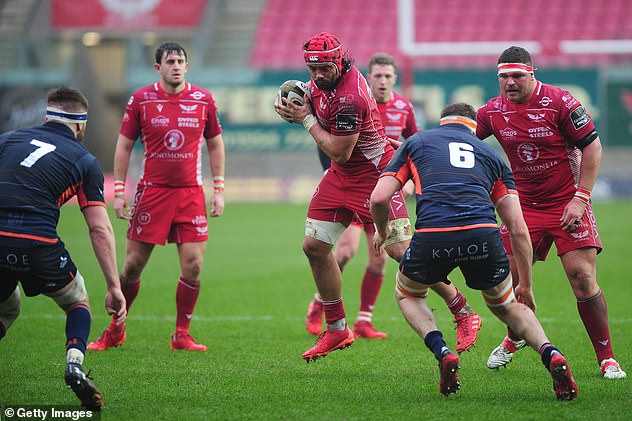 It should not be either. Wales’ XV has 865 caps-worth of experience, second only in their history to the side that took the field last week against Ireland.

A new name included is Willis Halaholo. The 30-year-old Cardiff Blues centre could finally win his first cap tomorrow (SAT) off the bench.

No less than 21 players picked by Wayne Pivac since he took the Wales job are unavailable this weekend.

After qualifying on residency – he was born in New Zealand and has played for Tonga under-20s – he was originally selected in 2019 only to be forced out injured.

Social media trolls have attacked his inclusion, based on his heritage, but Pivac stood firm behind the man he had in the Auckland academy a decade ago.

‘Hadleigh Parkes scored two tries on debut and everyone was pretty excited about his eligibility,’ said Pivac of another converted Welsh-Kiwi.

‘He’s been talking to Taulupe Faletau – they’re both Tongan boys – about all things Welsh rugby.

‘Willis has fantastic feet, something you can’t coach. He’s just got natural ability and skill, he’s got most defenders beaten, he wins most collisions out of any of the Welsh players in the midfield.

‘I think he could be a special player for us.’

Halaholo and James Botham, both only added to the squad on Tuesday evening after passing Covid tests, are on the bench.

So beaten up after Ireland Wales have only trained fully this week once.

And Pivac knows the Scots are rocking after their Twickenham win.

‘They’ve got a good group of players there who are playing for each other, you can see that, and they will relish the position they are in,’ he said.

But Scotland have not won back-to-back games to open the tournament since 1996 and Gregor Townsend is fully aware that beating England will mean nothing if they do not beat Wales too.

‘Winning helps in terms of the mood,’ he said having lost Cameron Redpath, Jamie Ritchie and Sean Maitland to injury himself, replacing them with James Lang, Blade Thomson and Darcy Graham.

‘But there is a concern always that confidence can cause you to take your eye off the ball.

‘We’ve not seen that from our players this week.

‘We’re going to not just back up our performance and improve on it.

‘We believe we can be a match for anybody in this Championship.’