When ‘cranky little bugger’ Walker’s on, Souths are strong

It only took Wayne Bennett a handful of training sessions once he arrived at Redfern to realise the magnitude of the talent he had on his hands when it came to Cody Walker, the instinctive South Sydney playmaker.

Bennett always had a high regard of Walker from coaching against him. Yet it was only when he was able to peer inside the bonnet and watch Walker operate behind the scenes that he started to appreciate what he really may be capable of across an NRL season.

“I didn’t realise how good he was until I arrived at Souths. After about two or three training sessions, I realised I had something pretty special on my hands,” Bennett said. “I think everybody can see how well he’s done [this year], his stats are quite incredible.”

Bennett was likely referring to Walker’s NRL-leading 33 try assists, which only serve to illustrate the multitude of issues he can cause tired or unwary defences, or even those who may try to rush up and single him out, only to watch someone else make them pay on his behalf.

It’s why he’s become perhaps the key figure for the Rabbitohs in their grand final against Penrith on Sunday. When Souths are playing well, Walker is inevitably playing better, which often means Souths are the ones singing their team song at the end of the day.

Walker took his seat next to halves partner Adam Reynolds and coach Wayne Bennett when he spoke to reporters for the first time this week on Friday. For both Reynolds, Walker’s longtime partner in crime in the halves, and Bennett, it will be their final effort with the Rabbitohs. 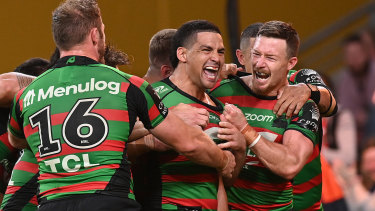 Walker will be around in seasons to come but would love nothing better than to help engineer a farewell to remember. The best way to do that, he said, was to keep all of that out of his head and make sure he pays attention to the finer details of his training and preparation.

“I think the way you repay these guys is not by making it all about them, it’s about going out there and doing your job for the team. That’s what we’ve been focused on, making sure we are ready to go at training and nailing that session. We’re ready to go this weekend,” Walker said.

Walker and Reynolds are both 31, a halves pairing in stark contrast to the department of youth at Penrith in Nathan Cleary and Jarome Luai. Their experience could well be a deciding factor for Souths, while their contrasting styles of play have ended up being the perfect blend.

“He’s [Reynolds] been absolutely amazing. He’s been my halves partner ever since I came into grade at 26. We’ve played the majority of our footy together. We’re a bit of yin and yang. He loves that upfront type of footy and I love being out the back and playing to my strengths,” Walker said.

“He’s got a great kicking game, it’s been a great partnership. We’ve got one more to go. But you don’t think about that sort of stuff leading into a big game, you just think about doing your job for the team.

“You don’t have any extra motivation to do well, the game itself gets you up.”

Speak to any of the Souths players about Walker and they reference an illusionist with the football, someone of such natural gifts that he regularly leaves them doing double takes on the training paddock and during matches.

Campbell Graham, the Souths centre, doubts there is a player in the NRL with more of an abundance of natural talent. In a modern game that can be rigid and predictable as teams run shapes and patterns, Walker is the one that can undo even the most disciplined of defensive lines.

“He’s showing all of his tricks and skills on the field and it’s all coming together for him now,” Graham said. “I’m really happy for him, he’s starting to get that recognition, five-eighth of the year at the Dally Ms which he thoroughly deserved.

“He’s one of those players that is just instinctive, he knows the game so well. He’s such a great player to learn from, his IQ for the game is incredible. He has so much natural ability and I think that’s second to none in the NRL.”

And Dane Gagai, the Rabbitohs centre, says you need to look beyond the silky skills to find the real reason Walker has been such a success as a late bloomer in the NRL, not starting in the top grade until he was in his mid-20s.

“He’s a cranky little bugger. He’s got a mean streak in him. But I love playing with Cody. He’s ultra-competitive, he wants to win all the time, not just on the field or at training,” Gagai said.

“We were playing volleyball the other day for a recovery session and he was getting filthy and blowing up because we were losing. That’s what makes him such a special player, he wants to be winning no matter what he’s doing.

“I love every minute playing alongside of him. Maybe it won’t be the last, maybe the Indigenous boys can do something down the track. I know he will enjoy every moment this week and so will I.”