In a season the AFL will never forget, Brett Ratten reflects on his first full year as St Kilda coach. He speaks about how close they got to the Tigers, his promise not to over coach and what Saints fans should expect from their team in 2021.

Of the four finals that Richmond played en route to their third premiership in four seasons, their win over St Kilda in the semi-final is perhaps the most forgettable.

A narrow loss to Brisbane saw the Tigers forced to utilise a double chance, they won a nail-biting preliminary final against Port by a kick and they came from 15 points down to win the grand final against Geelong. But don't tell that to Brett Ratten. 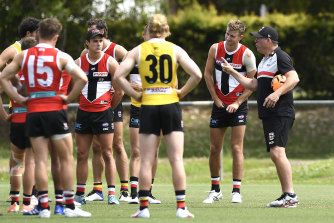 Brett Ratten doesn’t want to quash the instincts and flair of his players. Credit:Albert Perez

"With 10:52 on the clock in the Richmond game, we've had more shots on goal than them. We're +6 in contested ball, we're +8 in mark of opposition boot, there were things and aspects; we weren't as polished as them, they were more dynamic around the ball, they were a bit cleaner and classier. But we had a chance," Ratten said.

"We weren't good enough, they were too good, they should've won and they did win and they won the flag, but I think it gives our boys a bit of belief. We're not that far off the best."

The Saints' journey to their first finals win in a decade started before Christmas in 2019, when the players gathered for a pre-season retreat in Barwon Heads.

The list had just undergone a major reshape in the space of one trade period, adding the likes of Zak Jones, Dougal Howard, Dan Butler and Paddy Ryder. And it was those players who were asked to tell their new teammates how opposition clubs and players viewed the Saints. 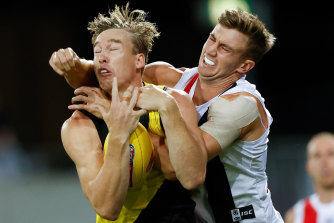 "We'll keep that to ourselves," Ratten said with a smirk, "but we got some home truths, there's no doubt about it."

The responses forced the group to ask themselves several questions.

"I think that was a big step for our team to accept some of the responsibility, work out what we could do about it and how we could shape the team moving forward.

"When you look back, it was a defining moment for us to take a step forward. We didn't achieve anything but we had a greater purpose. That was significant for us going into 2020."

Ratten has pledged to allow his team to "go out and play" and not to weigh them down with tactics and structures. The Saints have suddenly become a very quick team and Ratten wants his players to embrace their inner flair and creativity. 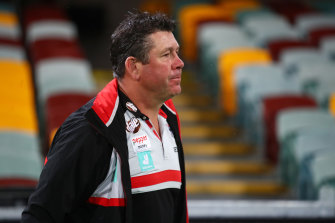 "I think you play to your strengths," he said. "When you recruit [Brad] Hill, Jones and Butler, you're going to become a bit quicker, we have to. We have to play with some freedom and flair.

"I think we can beat our players' instincts because we want to be so structured and we get kids in who have got this flair and talent but it's, 'make sure you stand here and … take four steps to the left'. We actually take away their instinct and what they do.

"There are rules and there is structure in our team … but I think sometimes we can over coach that and then we just beat the instinctive play out of the players. Maybe it's a bit of my personality … I want them to play and show what they can do."

But the coach did indicate there might be some subtle changes to the game plan that saw them win a final over the Western Bulldogs.

"You will see a different type of St Kilda, there will be a slight tinker."

Can you tell us any more?

It's been a long time since St Kilda played in successive finals series. They played in 11 finals over the course of four seasons, when the run came to an end with a losing elimination final to Sydney in 2011. Jarryn Geary is the only one still on the list that played in that game.

So what do the Saints internally see as a pass mark next year, given the additions of Brad Crouch, James Frawley, Jack Higgins and Shaun McKernan?

"We have to be pushing to play finals, I've never seen a team win a flag from outside the eight.

"To make a grand final is bloody hard to do, but you've got to put yourself in that space and just keep turning up. I look back at the Hawks in 2008, they didn't think they were going to win the flag. But things just happen because they keep putting themselves in a good space."

In the 2020 pre-season, Ratten published a note to the entire club on a staff whiteboard situated in a high traffic area where everyone could see it. 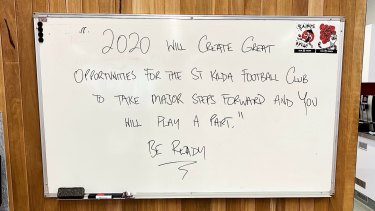 Brett Ratten’s message to players during pre-season this year.

"2020 will create great opportunities for the St Kilda Football Club to take major steps forward and you will play a part. Be ready," it read.

Ratten, who had only just been appointed senior coach on a full-time basis, after acting as stand-in for Alan Richardson, knew it was a pivotal year for the club.

Making the finals and winning one has been viewed as an obvious success, so what would the message read for next year?

The opportunity to win a flag?

Pressure at the top

Ratten has been around coaching long enough to know the pressure that comes with the main job. Many believe his contract was unfairly terminated at Carlton a year after the Blues missed out on the top four by half a game and fell painfully short of a preliminary final.

But his sacking at Princes Park led him to Waverley, where he was part of the famous three-peat.

"When I went to Hawthorn, I said to Clarko [coach Alastair Clarkson], 'Jeez you're very lucky, Al.'

"I had just come from the Blues and looking at the people around him — David Rath, Graham Wright, Mark Evans, Chris Fagan, Andrew Russell – I told him how lucky he was to have these quality people as these pillars around him. He agreed."

Since arriving at St Kilda, Ratten has attempted to solidify the pillars of support around him.

"That's what we're trying to set up here, these people of influence. It's not 'me', it's 'us' and what we can do for the players," he said. "That's the power of the coaching group and the footy department, not just the senior coach."

Despite the support, Ratten says he still rides the roller coaster.

"You still take on the losses by yourself," he laughed.