Advantage Melbourne Victory as City regroups ahead of derby

Tne W-League's mighty appear to have fallen – but the question is, if so, by how far?

Melbourne City has won four of the past five W-League championships and historically has signed the best international players and offered the best set-up for Australia's elite talents to play and develop their careers.

City still has the excellent Bundoora training facility as their home base, but that is where the similarities with the past seem to end.The wholesale changes to their title-winning team from last season – only two of last season's grand final-winning squad were in the line-up for last week's last gasp defeat at Canberra – means that coach Rado Vidosic has the job ahead of him to repeat that success. 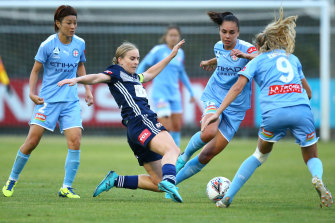 Melbourne Victory has renewed confidence ahead of their derby match against City. Credit:Getty Images

City won both of last season's derbies against Melbourne Victory – 4-0 and 1-0 – en route to an unbeaten title-winning campaign. But Victory sense that this season things might fall in their favour.

Jeff Hopkins, Victory's W-League coach, has also had to recruit a number of players but has been able to assemble his squad earlier and develop a cohesion that Vidosic, who has also been hindered by injuries to key players like captain Emma Checker, has not.

Vidosic has also not been able to select one of his major signings, Alex Chidiac, because she has been in quarantine following her return from Spain, where she played for Atletico Madrid.

Chidiac had her first training session on Saturday and Vidosic says he will wait to see how she pulls up before deciding whether she can play some part in Sunday's derby.

Hopkins took plenty of heart from his team's first game of the season – a goalless draw with star-studded Brisbane – in which Victory fielded five debutants, including goalkeeper Gaby Garton, who made several saves to bolster her confidence with a clean sheet.

All will be under consideration for Sunday's game – which has had to be switched from its intended venue at Dandenong City's ground to CB Smith Reserve in Fawkner – save for the unfortunate Tathem, who suffered a knee injury and will be out for the season.

Hopkins says he was delighted with the way his side played during the game with Roar.

"We finished the game off really well. It was a tough start for us, and the girls have come out of the game with a fair bit of confidence after the second half performance," Hopkins said.

"They [City] are definitely not the team they were last year, but I have a lot of time and respect for Rado. We have seen them from four to five weeks ago, and from where they were then to where they are now, they are making a real progression every week.

"They will be a much easier team to play against than they were last year, but it will still be a tough ask for us."

The coach believes that Victory's strength is in the midfield and up front.

"There's a number of areas we think where we are strong, and looking at our strengths and matching against them, then I think our front three especially, we can cause them a number of problems," Hopkins said.

"Them playing with a back three will be an advantage to us, maybe trying to isolate certain players in those one v one situations. I see that being a real strength for us this season, not just against City but all teams."

He is also confident that Victory's quick players will cause problems for a City defence that includes several new faces still trying to adapt to each other.

"We have got players in terms of pace, we are looking at Zimmerman, Lisa De Vanna – I don't think there's many with the pace that she's got – so that will definitely be one area," he said.

Veteran De Vanna – a former title winner with City in the club's first ever W-League season – needs no extra motivation for such a fixture.

"She gets herself up for every game. That's why we have brought her here. But it's definitely a special game playing against City and she will bring what she normally brings and maybe a little bit more for the derby game," he said.

Vidosic admits that re-fashioning a City team lacking so many established stars – including regular Matildas starters like Steph Catley, goalkeeper Lydia Williams and full-back Ellie Carpenter – is perhaps the most challenging assignment of his long career in the game.

He says, however, that his team should not be judged on the early rounds, while Chidiac is in quarantine, Checker out injured and many of his players from NPL Victoria getting back up to speed, having not played for more than a year, since the 2019 NPLW season ended.

"We just need to be patient and reasonable about how the situation is at the moment … once we reach round four or five we can be judged," Vidosic said.