Aguero hits back at criticism of his World Cup win celebrations

‘The most beautiful thing is my heart is happy’: Sergio Aguero hits back at Twitter criticism of his ‘shameless’ celebrations of Argentina’s World Cup win after retired striker wore a blue and white shirt to lift the trophy alongside Lionel Messi

Sergio Aguero has responded to social media criticism of his enthusiastic celebrations after Argentina won the World Cup – saying the triumph was a ‘beautiful thing’.

The former Argentina forward, 34, was prominent in the wild celebrations that followed Sunday’s dramatic penalty win over France having been a part of the team’s camp in Qatar.

Aguero, who was forced to retire from football because of a heart condition last December, donned an Argentina shirt and partied alongside Lionel Messi and Co on the pitch and in the dressing room afterwards. 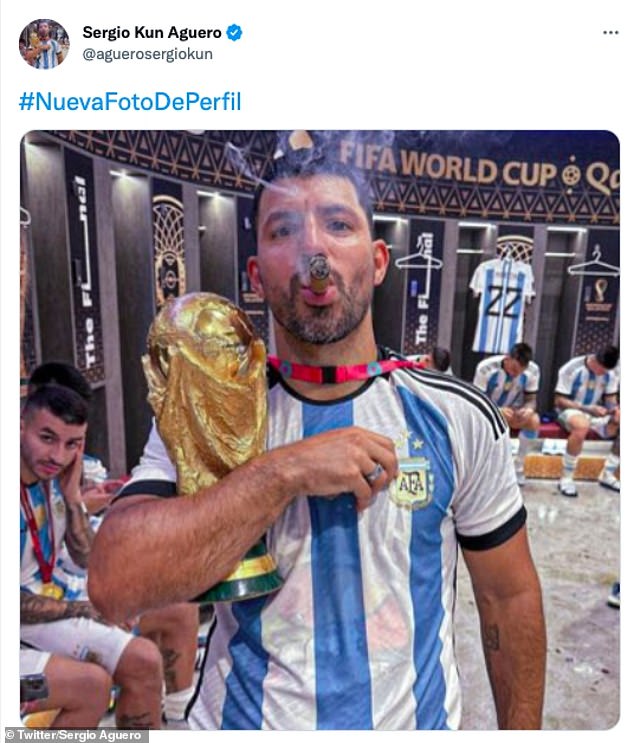 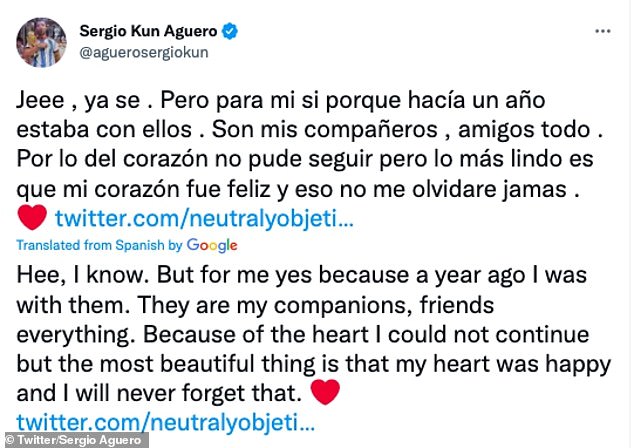 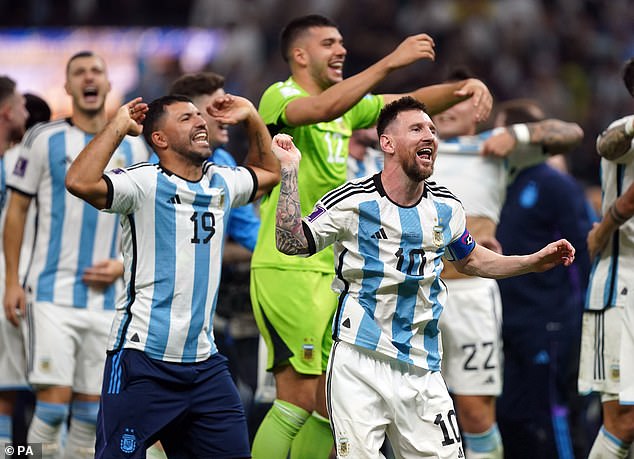 He changed his Twitter profile picture to show him smoking a cigar amid the victory celebrations after holding a poll of his followers to decide which image to use.

Aguero then hit back at a Twitter user who said: ‘Kun, you didn’t win anything, stop being shameless.’

Quoting the tweet, Aguero replied: ‘Hee, I know. But for me, yes, because a year ago I was with them. They are my companions, friends, everything.

‘Because of the heart I could not continue but the most beautiful thing is that my heart was happy and I will never forget that.’

Aguero potentially would have been in the Argentina squad had he not been diagnosed with cardiac arrhythmia late last year just months after he joined Barcelona from Manchester City. 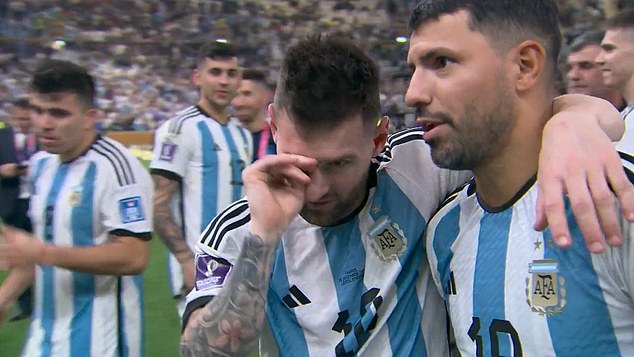 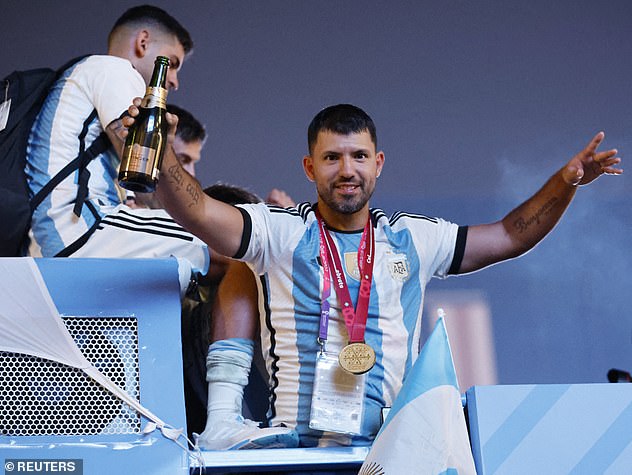 He made his 101st and final international appearance against Ecuador in the Copa America quarter-finals in July last year.

The striker was also an unused substitute in one of Argentina’s World Cup qualification matches in June 2021.

On Sunday, Aguero was seen lifting the trophy and hoisted Messi on his shoulders for what has already become an iconic photograph in emulation of Diego Maradona in 1986.

Aguero was also seen swigging beer on the open-top bus that paraded the victorious players around the streets of Buenos Aires after they flew home from Qatar.

It also emerged that Aguero won £6,800 on a bet that Messi would win the Golden Ball award for the World Cup’s best player. 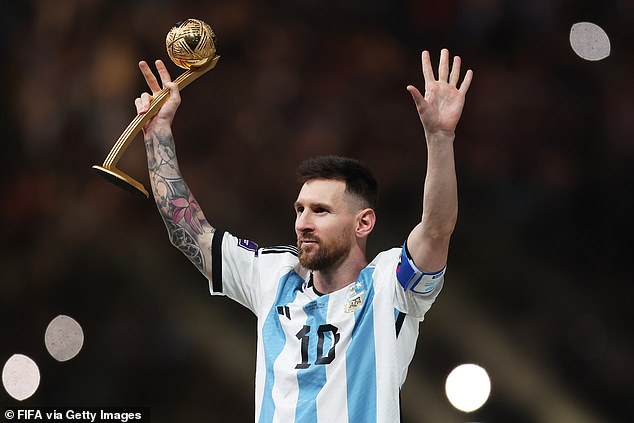 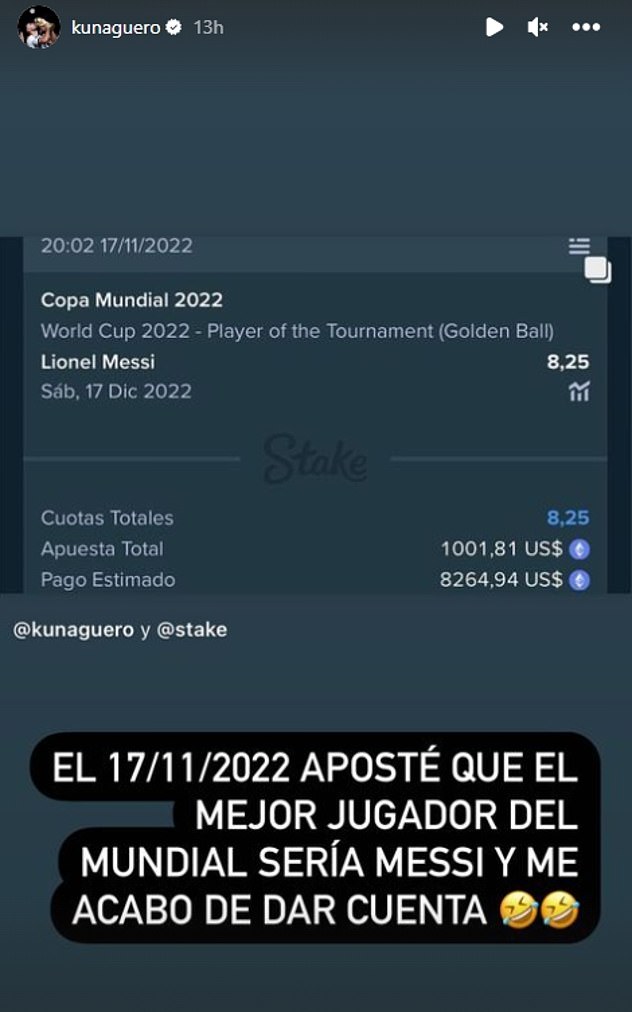 Taking to Instagram, Aguero shared a screenshot of the bet with his followers before admitting he only ‘just realised’ what he had staked.

‘On November 17, I bet that the best player in the World Cup would be Messi and I just realised it,’ the former Manchester City striker wrote.

It showed that the retired star placed a bet of $1,001 (£823) for Messi to win the accolade prior to the World Cup commencing.

The PSG forward ended the campaign with seven goals and three assists before being crowned the best player of the tournament.