Alex Morgan will leave Tottenham Women and return to the US in the New Year.

Morgan joined Spurs from Orlando Pride in September and made five appearances, scoring twice in the Women’s Super League (WSL).

The 31-year-old, who has 170 caps for the USA and is a two-time Women’s World Cup winner, used her time at Spurs to regain match fitness after giving birth in May.

Morgan told Tottenham’s website: “I will be forever grateful to the club, my team-mates and Spurs supporters for taking such good care of me and my family.

“From the moment I arrived in London, I realised I was part of a first-class organisation, one that helped provide me the opportunity to immerse myself back into the game I love. 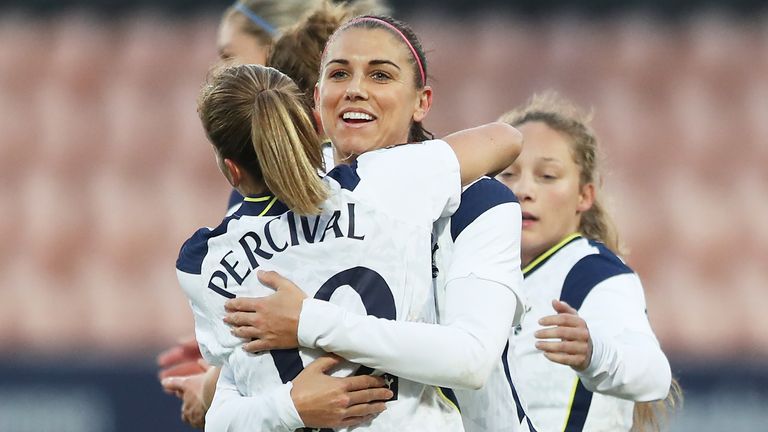 “Thank you to everyone who helped make this chapter in my soccer journey so special.”

Morgan will leave Spurs at the halfway stage of the WSL season – they are currently eighth in the 12-team division, having played nine times.

Tottenham’s head of women’s football Heather Cowan said: “We were delighted at the start of the season when Alex chose us as her club to help regain fitness and take her first steps back into competitive football after giving birth earlier this year.

“It has been a pleasure to have Alex with us during this period and the whole squad has taken a lot from working every day with someone at the top of the women’s game.

Get a Sky Sports Pass for just £25 a month

“We wish Alex all the best for the future, both at club and international level, as she prepares to return back home with her family. She will always be welcome here at Spurs.”

Morgan was one of a number of the USA’s 2019 World Cup-winning squad to move to the WSL at the start of the season, with Sam Mewis and Rose Lavelle joining Manchester City and Tobin Heath and Christen Press moving to Manchester United.

Morgan’s time in north London has come three years after her previous spell in Europe, which saw her win the French title, French Cup and the Champions League during a year with Lyon.